It's now been more than 12 months since cruise lines operating off the US and Canadian coast, and in the Baltic, North and US Caribbean Seas, have been subject to stringent fuel oil regulations set by the IMO. Within these emission control areas (ECAs), sulphur content must be cut to just 0.1% by mass, equating to a 90% reduction.

It was just the latest - and arguably most extreme - shift in fuel consumption legislation. In July 2010, sulphur oxides and particulate matter were reduced by a third from 1.5% by mass to 1.0% within ECA areas. Worldwide, the accepted level was cut from 4.5% by mass to 3.5% in January 2012. Nevertheless, this latest round of environmental red tape is forcing cruise lines to make tough economical and strategic choices.

"When it comes to these reforms, the general mood in the industry has been one of acceptance," says Donnie Brown, director of technical and regulatory affairs, environmental and health, at Cruise Lines International Association (CLIA).

"Not only is this the law, the shipping sector itself is also largely supportive of these measures. It comes down to a sense of fairness; if one group isn't complying, it means they're getting away with it at everyone else's expense."

Cruise operators have two main options for meeting the new regulations: investing in exhaust filtration systems (colloquially referred to as scrubber technology) that typically remove sulphur, nitrogen and particulate matter from emissions, or, switching from traditional bunker fuels to a low-sulphur fuel oil (LSFO) alternative. But with so many variables - highly volatile oil prices, limited supply availability and varying ship specifications - the choice is far from simple.

"Royal Caribbean Cruises is retrofitting 19 of its vessels with advanced emissions purification (AEP) systems, adding to the AEP technology already installed on Quantum of the Seas and Liberty of the Seas."

In June, Carnival Corporation announced that it had signed a multibillion-euro deal with major shipbuilders Meyer Werft and Fincantieri to build four 'next-generation' ships. They will be the first cruise vessels to power their journeys with liquefied natural gas (LNG) in dual-powered hybrid engines - a development that, the company states, represents a real environmental breakthrough, and a seismic step in the right direction for an industry with a historically heavy carbon footprint.

But solutions do not necessarily have to be so extreme - or expensive. Brown believes that around a third of cruise lines with oceangoing vessels have already opted - or soon will opt - for scrubber technology. Carnival has invested $400 million in designing, building and installing its own ECO exhaust-gas-cleaning systems that will be used across more than 70% of its fleet. Royal Caribbean Cruises is retrofitting 19 of its vessels with advanced emissions-purification (AEP) systems, adding to the AEP technology already installed on Quantum of the Seas and Liberty of the Seas. Norwegian Cruise Line is also currently fitting 28 scrubbers to six ships, and fitting such technology to new builds as standard.

"Investing in and developing something new is a good image for the cruise industry," Brown comments. "It shows our commitment to the environment, which you'd hope would be seen as positive by our passengers."

For those who have not invested in scrubber tech, the standard alternative is switching to marine gas oil (MGO) while passing through ECA areas. A distillate rather than the traditional heavier residual fuel oil, it allows vessels to meet the 0.1% sulphur regulations. But while MGO may seem like the perfect quick fix, it can carry a high long-term cost for operators, even in a landscape of tumbling oil prices.

"MGO is a relatively easy solution for cruise lines, but it's really a short-term operation," says Captain Peter Hall, CEO of the International Bunker Industry Association. "You can use it for around 24 hours coming into and moving through an ECA area. But in the long run, unless you adjust your engine, you've got some challenges in changing from a residual fuel oil to distillate. The age of the vessel also needs to be considered, as does its configuration, operational deployment and lubrication oil requirements. This is not a simple question for operators. It requires a methodical approach."

The falling price of Brent crude has, to a large extent, offset this cost increase. Yet a fall in MGO pricing is not necessarily the great windfall for cruise lines that it first appears. Hall explains that while much of the relevant refining capacity is in the Middle and Far East, many of the ECAs are in Europe. Consequently, a significant proportion of the continent's fuel must be shipped in, adding to overall expenses.

"The other important point is that, taking a global perspective, the existing refinery sector is very much geared towards the automotive industry," he says. "Shipping is a tiny percentage of the world market; it's quite far down the pecking order."

As a result, Hall explains, refiners have done little to prepare for the impact of ECA regulations on MGO. With no increase in supply and growing demand, prices should eventually start to rise. Yet Hall doesn't see that happening for a while.

"Globally, we've currently got an enormous supply of crude oil, which is principally driven by US tight oil and what's effectively a free-flow OPEC policy. With the US oil, analysts are saying that once you've put your money in, you've got to keep the well going until it runs dry. So that's a 12-18 month scenario," he says.

"It's looking like we could have low prices for the next 12 months or so. After that, I think we'll go into an intermediary scenario where supply is more effectively managed. That will start to push the price back up."

In the longer term, Hall believes much will depend on how transport in the world's large and fast-developing economies - particularly China - evolves. If these nations grow more Westernised and start to rely more on automobiles, fuel demand will dramatically increase. This will drive up costs for everyone, including the cruise industry.

"A lot of companies are already positioning themselves for that eventuality by doing R&D into alternative fuels," Hall adds.

LNG is one of the more popular alternative fuels, as evidenced by Carnival's announcement. Sulphur-free and with very low nitrogen oxide emissions, it easily meets the existing ECA requirements and is available at an increasing number of European fuelling points.

"The industry is definitely considering LNG, though it's often seen as easier to incorporate into new builds with a completely fresh design than to retrofit," says Brown.

"It also requires different-sized tanks, which can take up cabin space, so lines have to decide whether it's really financially viable. There are also additional safety considerations when it comes to LNG, which require evaluation."

"There's certainly a case to be made for LNG," adds Hall. "At the moment though, there's still quite a large cost gap between LNG and traditional hydrocarbon fuels like HFO or MGO. Installing an LNG-ready engine also requires quite a large capital investment. Methanol is another alternative that's currently being tested, and there are a number of other fringe fuels, such as hydrogen. It's really a very complex area."

Future tightening of environmental shipping regulations is also likely to encourage operators to consider alternative fuels. From January 2020, new IMO legislation is currently set to reduce worldwide sulphur oxide and particulate matter limits from the current 3.5% by mass to 0.5%. The IMO's Energy Efficiency Design Index (EEDI) - mandatory regulations that limit CO2 emissions that were made applicable to cruise passenger vessels (with non-conventional propulsion) in 2014 - will also continue to tighten every five years until 2025, by which point a 30% reduction is required.

"The 2020 sulphur regulations are definitely on the industry's radar. But with a large number of itineraries already having some operation within 0.1% emission control areas, we're pretty well prepared for the 0.5% caps, at least within our broad oceangoing members," says Brown.

"With a large number of itineraries already having some operation within 0.1% emission control areas, we’re pretty well prepared for the 0.5% caps."

Yet, while Brown may be right in assuming operators are generally prepared for more regulations, Hall believes individual reactions within the cruise sector will be anything but uniform.

"You'll have three basic groups of operators: the leading-edge companies that have the capacity to investigate alternative fuels effectively, the herd who will wait and see which approach seems to work best and then the laggards who'll only respond at the very last moment. We've seen this pattern consistently across the shipping sector in response to other regulatory changes, such as double hulling," he states.

"For the lines that get it right, there's going to be a distinct competitive advantage. For those that don't, there will be a real cost. Whatever happens though, there's definitely going to be winners and losers."

Fourth quarter fuel prices were well below the company's previous guidance of $366/mt.

The company noted that fuel prices, net of fuel derivatives, along with currency exchange rates are expected to add $0.22 to per-share earnings in 2016, as compared with 2015.

In the same quarter, Royal Caribbean saw fuel costs drop 13%, which contributed 29% to adjusted earnings - Carnival benefitted to an adjusted earnings spike to the tune of 85%, a clear victory for its hedging programme.

However, both operators' bottom lines remain vulnerable to unexpected increases in fuel costs. If OPEC actions, regional conflicts, or other factors cause oil prices to rise, they stand to lose that major bottom line tailwind. 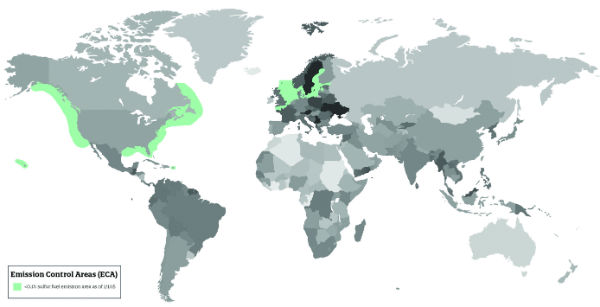