The Baltic cruise market is booming. With increased activity, though, comes more pollution, a worry that has led several countries in the region to impose strict environmental regulations on ships. Andrea Valentino talks to Andreas Slotte, head of sustainable development at the Port of Helsinki, and Claus Bødker, director of Cruise Baltic, about how cruise companies are working to better protect the region’s delicate ecosystem.

Look at paintings by Caspar David Friedrich and you can see how the Baltic once was. Fallow fields, green and brown, lope down to the water and muddy clouds sit above. Many of his scenes are deeply still, as if the artist has sung the sea to restful sleep. In one painting, finished around 1835, two figures squat, dimly flanked by a pair of rocks. They might have been there for ages, staring into the empty, endless Baltic from the day they were born.

No longer. Nearly two centuries from the death of the great romantic, his sea blazes with activity. In July, for example, cruise operator MSC inaugurated a new terminal at Kiel, and plans to deploy two ships in the German port from 2020. Even Greifswald, the drowsy harbour Friedrich grew up in, now hosts several ships a year. This enthusiasm is easy to understand – from solid infrastructure to elegant architecture, the Baltic has lots to recommend it. No wonder the number of passengers in the region nearly doubled in the decade to 2018.

Yet cruise companies do not have everything their own way. With pollution a major worry across the Baltic, several countries along its shores have introduced strict environmental regulations for cruise ships. Operators are doing what they can to adapt, but it remains unclear if they can truly balance ecology with commerce – even as ports do their best to prod ships towards greener practices.

Trace a map of the Baltic with your finger and you can almost circle the entire sea without ever touching water. Apart from a few channels to the Atlantic, flecked like streaks of blue paint between Denmark and Sweden, the Baltic is completely landlocked. This makes the sea an ecological marvel, its shallow, brackish water perfect for animals and plants. Sail near the Danish port of Odense and you might spot a glimpse of a rare white porpoise. Go north east to the Gulf of Finland and you can see families of seals, lolling tipsily by the shoreline.

But geography can also be a menace. Because the Baltic is practically a lake, waste has almost nowhere else to go. So when run-off from coastal farms seeps into the water, the sea quickly withers. Nitrogen and phosphorous from fertilisers have eutrophied over 95% of the sea, a process whereby invasive algae gobble up nutritious oxygen and light. This has led the bladderwrack, a type of kelp and pillar of the Baltic food chain, to disappear from some areas, and other patches of seabed to become completely barren.

Eutrophication can be dangerous for humans too. Last year, for example, officials shooed tourists off beaches in Poland and Lithuania after discovering cyanobacteria, a blue-green algae that emits poisonous toxins. “The Baltic Sea is not in a very good state at the moment, and hasn’t been for some years,” admits Andreas Slotte, head of sustainable development at the Port of Helsinki. “Eutrophication is a big concern for all the states around the Baltic.”

Not that farmers should carry all the blame. Though 80% of the pollution comes from agriculture, cruise ships were dumping upwards of 100t of nitrogen-tainted waste water into the Baltic as recently as 2008. It hardly helps that the sea has matured into a major cruise destination, with 5.4 million passengers sailing into the region last year alone. Large ports can get especially crowded. Stockholm welcomed 268 international cruise ships this past summer, while Helsinki typically hosts a dozen big vessels over its busiest fortnight.

Claus Bødker is a busy man. When we start our interview, he is drafting an article for a Danish newspaper, countering attacks on the local cruise industry. You get the impression he does that a lot. “We are very much on the defensive,” says Bødker, director of Cruise Baltic, a marketing organisation. “Scandinavians believe that everything should be as clean as possible, and cruise ships are a part of that.” Slotte agrees, adding that the “nature-loving” character of the Nordic people leaks into the regional green agenda.

They have a point, especially if you leaf through Baltic statute books. Eutrophication and other worries have mingled with Nordic environmental passion to transform the sea into a fortress of cruise regulation. In 2015, ships with fuel containing over 0.1% sulphur were outlawed in the Baltic. A year later, the International Maritime Organization announced a ban on the dumping of ship waste in the region, a world first, though operators have until 2021 to polish their act.

Individual countries are taking the lead too. Finland passed rules forcing ships to dump waste responsibly, while Denmark has even mooted banning cruise ships from Copenhagen altogether. At the same time, new rules are being shadowed by angry campaigns from environmentalists. Climate protestors in Kiel recently blocked the departure of the Zuiderdam, a Holland- American Line ship, until police cleared the way.

For Bødker, these frenzied reactions, if admirable, miss the point. He suggests that while operators can never hope to be “100% sustainable” all those regulations are working as well as they can. Certainly, cruise companies are keen to show their progress. Viking Grace, a new ship by Viking Line, boasts a ‘hydrodynamically optimised’ hull to cut fuel consumption, and an energy recycling system. Color Line has installed scrubbers on all its vessels, a move the operator says cut sulphur dioxide emissions by 2,500t a year.

“The Baltic Sea is not in a very good state at the moment, and hasn’t been for some years. Eutrophication is a big concern for all the states around the Baltic.”
Andreas Slotte

They are not unique. AIDA, headquartered at the old Hanseatic port of Rostock, has embarked on a tapestry of environmental changes, all targeted towards what a company spokesperson calls the ‘long-term goal’ of emission-neutrality. This includes installing rechargeable fuel cells and sharpening route management. Another area of focus is reducing plastic waste. “Plastic straws have been replaced aboard AIDA ships with straws made of biodegradable starch,” a spokesperson explains. “Furthermore, straws are not automatically provided with every beverage but only with cocktails or at the guest’s express request.”

Travel to Copenhagen this summer and you might want to bring a mask. According to new research from Aarhus University, cruise ships visiting the Danish capital emit more noxious particles than all the cars in the country. To put it another way, even as heavy legislation nudges operators in the Baltic towards a greener stance, there is plenty more to do.

That is not always easy, especially considering the costs involved – and the temptations of 7% annual passenger growth in Baltic ports. But if judges in France and the Bahamas have fined ships trying to dodge environmental laws for a quick buck, operators in the Baltic seem more honest. As Bødker notes, despite vigorous checks, “no fines have been given to cruise lines in the Baltic”.

For Slotte, this admirable record ties back to local environmental concerns, and not just because they make captains guilty about dumping waste overboard. “The people living around the Baltic are really nature-loving, so I imagine they would put a premium on services that can guarantee that they operate in a sustainable way. You have to show that these things are in order, and you’re not discharging into the ocean. It goes hand in hand; if you focus on the environment, you’ll also be able to grab an extra share of the market.” It is hard to disagree, especially as passenger numbers continue to soar even as regulations get tougher.

Nor are operators alone in putting the green in greenback. Several Baltic ports now offer discounts for ships that unload their waste responsibly. Helsinki is especially generous, scratching 20% off the waste water disposal bills of arriving vessels. As Slotte explains, because the port charges a fixed “no-special fee” whether ships take part or not, operators would have to be fiscally unhinged to keep dumping at sea. No wonder 90% of vessels now docking in the Finnish capital leave their waste water on shore, a major boon in the fight against eutrophication.

But balancing environmentalism and profit might get harder in the future. Operators are gradually fitting their ships with cleaner onshore power technology, though refurbishment costs about €2.2 million per ship. Baltic ports are following suit. Kiel has already opened its own €1.3 million onshore charging facility for Color Line, and Rostock hopes to be recharging AIDA ships by 2020.

5.4 million
Passengers who visited the Baltic in 2018.
The Maritime Executive

The narrowness of the Baltic cruise season makes Bødker wonder if all these investments are really worthwhile. The challenges of charging vessels in facilities designed for different ships worry him too, particularly given only 14 ports worldwide currently have the right facilities. “Cruise ships need a port where they can switch to shore power, otherwise the technology is a waste of money,” he adds.

And though Slotte does highlight the benefits of LNG fuel – which generates about 30% less carbon dioxide than regular fuel – he hints that operators should focus on simpler tweaks for now, saying, “Better recycling, and not discharging into the sea, are definitely their number one priorities at the moment. The general direction is very important.” By those standards, at least, the Baltic cruise industry is doing well, even if Friderich and his Baltic can never return. 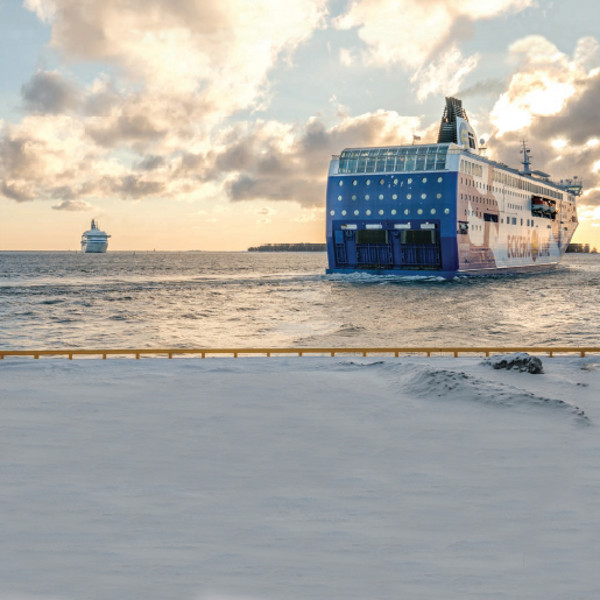 An Eckerö Line vessel approaches shore in the Baltic. 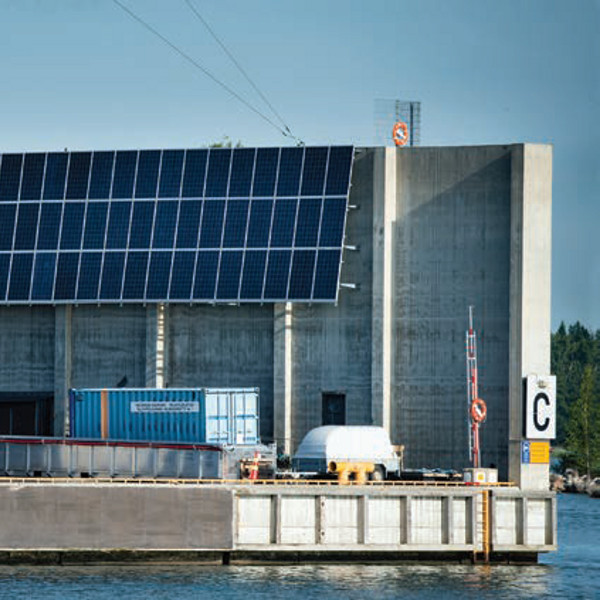 In 2015, ships with fuel containing over 0.1% sulphur were outlawed in the Baltic. 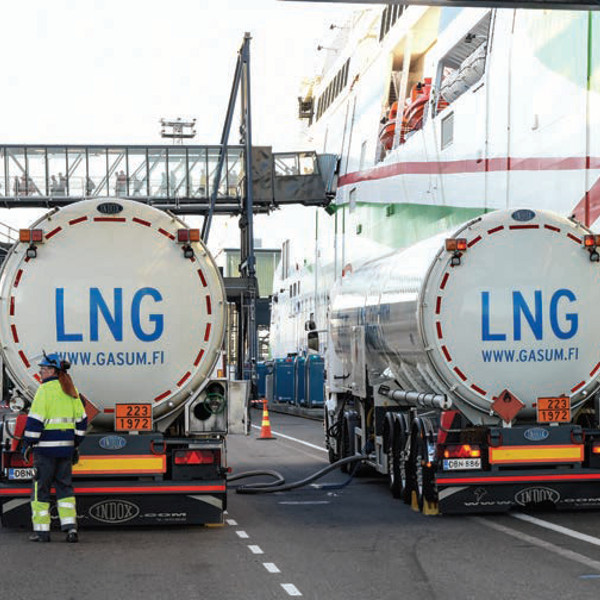 The use of LNG is encouraged, as it generates about 30% less carbon dioxide than regular fuel.