For decades a relative backwater, the Adriatic has been booming, with passenger numbers and local incomes clambering to new peaks. But, increased activity brings a range of environmental and societal problems. Andrea Valentino talks to Francesco di Cesare, head of the Adriatic Sea Forum; Dusan Varda, director of the Mediterranean Centre for Environmental Monitoring; and Elsid Xhelili, an adviser to the Albanian minister of tourism and the environment, about why the sea is so popular, and if governments can resist the temptation to cash in.

For hundreds of years, the Adriatic was a Venetian sea. Over 3,000 of its galleys once patrolled those waters, fighting and keeping wealthy burghers stocked with Indian pepper and soft Chinese silk. And every time a ship was lost, the Arsenal in Venice would pump another. “One hammers at the prow, one at the stern,” wrote Dante of the Adriatic shipwrights. “This one makes oars, and that one cordage twists.” That navy, and the republic it defended, has long since disappeared. Yet something of the frantic energy conjured by Dante is returning to the channels the Venetians once called mare nostrum – our sea. Spurred on by stunning landscapes and culture, cruise operators have tumbled into the Adriatic, disgorging thousands of passengers into its old towns and harbours. The resulting boom is transforming the economies of the Adriatic coastline, but – for all the excitement, some residents fear the destruction of the very beauty that visitors go to enjoy.

In Kotor, history piles on history like it’s desperate for air. The Romans came first. A few miles from the old town are the ruins of an ancient villa, mosaics of forgotten gods still lolling on the floor. As Rome collapsed, Slavic conquerors took their place. In the cathedral of Saint Tryphon, near the water, you can see a memorial to Tomislav, king in Kotor even before the Norman Conquest. Yet more of the port is Venetian. Its stamp is everywhere, from the stout walls in the harbour to the winged lion carvings that once graced every flag in its empire.

Almost all the Adriatic is like this. From Istria and Trieste in the north, past Dalmatia and its islands, Kotor in Montenegro and on to the Albanian frontier; the old inhabitants of this sea flutter down to us through a hundred fortresses and a thousand churches. “This is a small sea, but with so many interesting destinations,” says Francesco di Cesare, head of the Adriatic Sea Forum. “It has so much worth seeing in terms of art, culture and history.” Altogether, says di Cesare, the Adriatic coastline boasts 10 UNESCO World Heritage Sites, including the old town of Kotor.

Between communist rule and ethnic slaughter, much of this beauty was once inaccessible to all but the most intrepid of travellers. But with Croatia and Slovenia safely in the EU, and Montenegro and Albania eager to join, tourists have been coming in vast numbers. Between them, the Croatian ports of Dubrovnik and Split welcomed nearly two million visitors last year, while Kotor itself has seen a 12.7% rise in tourists since 2017.

Much of this activity is being pushed by the cruise industry. With six countries and over 30 ports to choose from, operators are crafting new itineraries, something reflected in the statistics. According to the Adriatic Sea Forum, 7.3% more passengers visited the Adriatic last year compared with 2018, while Viking and Celebrity are just two of the operators now offering tours of the region. Overall the biggest destinations – Venice, Dubrovnik, Kotor – now see many hundreds of calls each year. Smaller spots are booming too. The Montenegrin town of Bar hosted 6.6% more ships in 2019 than it did the year before.

This cultural wealth dovetails with superb natural beauty. “We have a very high biodiversity index,” says Dusan Varda, a Kotor resident and director of the Mediterranean Centre for Environmental Monitoring. “There really is astonishing nature here. The variety of species in Montenegro is hardly matched anywhere in this part of the Mediterranean.” Among other things, Varda highlights the loggerhead sea turtles, and the dolphins that paddle and play just a few metres from shore. And wherever you go in the Adriatic, the mountains are there to meet you, oak trees and olive groves stumbling right down to shore.

Regional governments are doing their best to accommodate even more arrivals. Between 2006 and 2013, Croatia invested €531 million on new port infrastructure, while Slovenia spent €14 million in 2017 alone. And why not? With much of the Adriatic still poorer than the EU average, generous cruisers represent an economic godsend. At Kotor, for example, each passenger spends around €40 per visit – not bad in a place where the average wage come to just €630 a month. No wonder the most impoverished country in the region is keen to get involved too. Elsid Xhelili, an adviser to the Albanian minister of tourism and the environment, enthusiastically extols the “great effects” of the cruise industry on his country, adding that his bosses are planning “very high capital investment” in Albanian ports over the next decade.

As they awoke on a bright day in April 2018, Venetians discovered their neighbourhoods blocked. To cope with a tsunami of cruisers and other tourists, the city decided to erect barriers near popular landmarks, essentially segregating residents in their own city. Locals were unimpressed. Armed with placards declaring that “Venice is not an amusement park”, they took to the streets. One group of protesters even jostled past police and ripped one of the gates down.

With its palaces and canals, Venice is probably the most dramatic example of cruise overcrowding. Yet almost every tourist town on the Adriatic suffers similar problems, especially as most were built when plague and pirates kept populations down. Desperate to explore the ‘real’ Game of Thrones, over two million passengers scurried through the old town of Dubrovnik in 2013, a part of town with just around 1,500 permanent residents. The Croatian town of Zadar is rather bigger, but still had to deal with 137,000 cruisers in 2018.

As Varda explains, all this can have a dreadful effect on local culture. In Kotor, he notes, residents are used to sitting in traffic jams as groups of cruisers cross the road en masse, like gigantic shoals of fish. To escape the disruption, normal people have begun moving to the suburbs, and offseason Kotor is pretty much empty. In the summer, Varda adds, his hometown becomes a “shopping mall” as tourist chains try and make a catch. The Kotor that once was – an intimate community of jewellers and shoemakers – has ceased to exist.

British newspaper headlines about “anti-tourist riots” are an exaggeration, but, as in Venice, these depredations have sparked a reaction. Dubrovnik recently announced that only two cruise ships, carrying a maximum of 5,000 passengers between them, would be allowed to dock each day. Venice itself has banned the largest vessels from anchoring in its lagoon. For their part, Varda and other Montenegrin activists want a similar regime in Kotor.

Not everyone is convinced. Di Cesare notes that passengers represent a small number of overall tourist numbers – and that regional cooperation can improve local well-being. He might have a point. Some visitors to Kotor now dock at Bar and transfer by bus, while Venice and Trieste have a similar arrangement. At any rate, grumbles Varda, that does little to cut the environmental risks of cruise tourism.

Apart from upsetting the underwater landscape of Montenegro, ship anchors cut “devastating canyons” through the soft muddy shoreline, he says, worrying about the threats to local wildlife. To prove his point, Varda recalls the case of the maniacal turtles. Normally placid creatures, they began biting swimmers near Kotor about three years ago. “We concluded that they probably attacked because of the stress caused by the number of cruise ships coming into Kotor Bay,” he says. “The noise acted as a kind of drug.”

Even in summer, Sarandë is still quite quiet. Just 65 ships stopped at the Albanian port last year, compared with 475 in Dubrovnik and 292 in Split. Yet, as Xhelili hints, that might soon change: the central government in Tirana is already in consultation with Sarandë to manage the coming wave. Nor is Xhelili alone. Industry insiders talk of Sarandë and its sister port of Durrës as a “fantastic opportunity” for operators, something the biggest companies are already exploiting. Everyone from MSC to Holland America originally planned to dock ships in Albania this summer, seducing customers with promises of Greek ruins and Ottoman mosques.

To put it another way then, Albania may soon be faced with the same challenges hanging over Venice, Dubrovnik and Kotor: how to balance the economic benefits of cruise ships with their social and economic cost? Asked about the prospects of his southern neighbours, Varda is pessimistic, suggesting they’ll take action only after the cruise ships have caused a mess: “They will be very open to the ships to start with.” Coming to the realisation that the industry actually has downsides, he concludes that it is “a historical process that everyone has to go through”.

Even so, there is some evidence that this late arrival to Adriatic cruising might avoid the mistakes of Croatia and Montenegro. Unlike Montenegro, for example, Albania has marine protected areas to keep pollution and bloodthirsty turtles in check. For his part, Xhelili is clearly aware that his brief covers both tourism and the environment, admitting that, “Sarandë is a small place, and is not always prepared to host huge numbers”. Partly in response, Sarandë recently obtained a $71 million loan from the World Bank to “strengthen institutional capacity to support tourism-related development”. Among other things, the town plans to build more open spaces. Perhaps, finally, the people of the Adriatic are giving the nostrum part of Venice’s old mantra the attention it deserves. 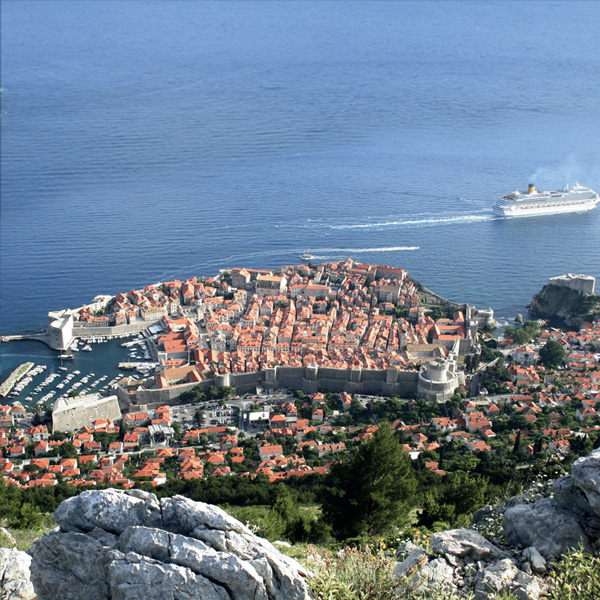 Millions come to the old walled city in Dubrovnik every year, even though the number of permanent residents is barely into the thousands. 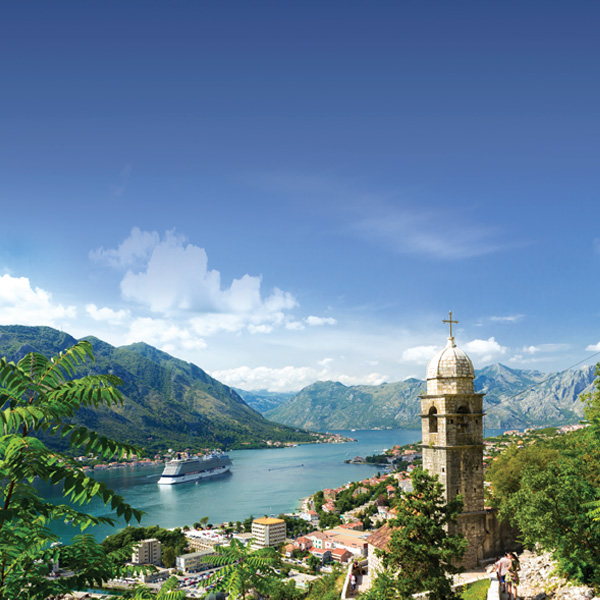