More than 30 million tourists cram into Venice every year and tensions are rising among the city’s residents. Andrea Valentino talks to Galliano di Marco, head of the Venice Passenger Terminal; Pino Musolino, president of the North Adriatic Port Authority; and Sebastian Fagarazzi and Valeria Duflot from the Venezia Autentica campaign group.

Venice is no stranger to tourism. In the 18th century, thousands of young British aristocrats flocked to visit the floating city as part of the Grand Tour. Later, its crumbling Renaissance palaces attracted the Romantics: Byron spent time in Venice while Turner painted some of his most inspired works there. Truman Capote said that exploring La Serenissima was like “eating an entire box of chocolates in one go”.

But if visitors have been coming to Venice for centuries, the city has also struggled to cope with their increasingly voracious appetites. In 1949, just two million people visited the floating city. In 2016, that figure mushroomed to over 30 million. Accompanying this general explosion in tourists is the Venetian cruise sector. Since 1997, the number of cruise passengers coming to Venice has increased fivefold and the city is now Europe’s largest home port, thanks in part to a 90% share of turnaround passengers.

In recent years, the cruise liners have faced criticism from locals and international pressure groups. Frustrated by the environmental and social impact of the vessels, organisations like No Grandi Navi (No Big Ships) want the ships banned from Venice entirely. A recent unofficial referendum found that most citizens agree, while the Italian Government has also intervened against the cruise operators. In 2013, Rome banned ships larger than 40,000t from docking in the city, though this decision was later reversed in court.

To try and calm the situation, cruise companies agreed to not sail ships larger than 96,000t into the Venetian lagoon. But beyond that, a permanent solution has proved frustratingly elusive. While the government has been promising to fix things for years – rushing between the Port Authority, the cruise companies and local activists – political bickering has kept progress slow, even after UNESCO threatened to put Venice on its blacklist for failing to change.

This uncertainty is now putting a strain on the local cruise industry. The number of passengers arriving in Venice dropped by 11.4% in 2016. P&O has abandoned the city entirely for the rest of 2017, while Cunard has announced a reduced service to Venice for the 2018 season. All told, 10% fewer ships will dock in Venice this year compared with 2016. This downturn worries Galliano di Marco, head of the Venice Passenger Terminal. “The economic impact [of the dispute] is already increasing,” he says. “If you take data from 2015, for example, the whole cruise industry contributed €300 million to Venice. But we expect to go from something like 1.8 million passengers to about 1.4 million. We’ll have lost another 200,000 passengers by the end of 2017. So, economically, we’ll only be making something like €200 million.”

There is also a human cost to the slump, Di Marco continues. “We’ve already lost some jobs,” he says. “We have about 4,000 people working full time in the Venetian cruise industry. But what about people with temporary jobs, from agencies, or university students? We’ve had to get rid of them. Remember, the industry is not only the cruise ships. There are also the handling companies, the food companies.”

Nor have these effects been limited to the Venetian lagoon. Cruise companies have been forced to change their global schedules, with Holland America Line transferring one of its ships from Venice to Alaska. Other ports in the region are also suffering.

“This is not an impact limited to Venice,” emphasises Pino Musolino, president of the North Adriatic Port Authority, which includes Venice. “The current situation also has negative consequences for all the Adriatic ports, whether Italian or foreign. Therefore, any change in size for the cruise market has a relevant impact on the whole Italian economy.”

For many locals, economic considerations are outweighed by the effects of the ships on Venice and its people. “We understand that the cruise ships can be a positive contributor,” acknowledges Sebastian Fagarazzi, founder of Venezia Autentica, a campaign group. “But it needs to be done in a more sustainable way.”

Fagarazzi and his colleague at Venezia Autentica, Valeria Duflot, are especially concerned about the cruise ships’ environmental impact. “First, there’s the damage to the foundations of the city, caused by the enormous quantity of water moved as the ships pass through the city,” Duflot explains. “Then there’s the huge quantity of polluting emissions, such as sulphurs and ultra-fine particles [that are] released by ships in the most densely populated and visited area of the city.”

These problems have the potential to severely impact the city. Its ancient foundations are especially vulnerable to the water displaced by cruise ships as they pass by and many buildings are already riven by cracks. Concerns about air quality also seem reasonable, up to a point. According to a 2013 Italian senate report, each cruise ship produces the same amount of pollution as 14,000 cars while docked in the city. Another study, by the Veneto Cancer Institute, says that Venice has “a statistically significant excess of lung cancer [cases] compared with the rest of Italy”.

But when asked if cruise operators were doing enough to limit the environmental impact of their vessels, Di Marco rejects the question’s premise. “[Opponents of the cruise ships] keep saying a lot of lies about the cruise industry,” he says. “There are a lot of myths that need to be reversed. This idea that ships are polluting and devastating life? That is not true. Anyway, we already have strict regulations. Cruise companies have taken the lead on this.”

In particular, Di Marco cites Venice Blue Flag, a voluntary agreement that requires cruise liners to use low-sulphur fuel, containing less than 0.1% sulphur, when they enter the lagoon. This is far below the Italian standard of 1.5%, he emphasises. “It’s not a game,” he says. “All the cruise companies obey [Venice Blue Flag], not just the ones that are part of [cruise liner association] CLIA. The Port Authority and the harbour master check each ship as they come in. If a ship doesn’t respect Venice Blue Flag, its name is put in the harbour master’s database.”

Despite a few violations – a ship was fined for using the wrong kind of fuel in 2015 – this arrangement does seem to be helping. According to a recent study, the amount of sulphur oxide in the air has fallen by over 90% since Venice Blue Flag was implemented in 2007. The number of dust particles in the atmosphere has also decreased. The use of scrubbers has helped too, adds Di Marco, suggesting that their high cost – €1.2 million per engine – shows that cruise operators do take their responsibilities seriously.

Pushing out the boats

If schemes like Venice Blue Flag are helping to muffle the worst environmental effects of Venice’s cruise ships, there is still a lot to do. Until a solution is reached, vessels will continue as they have for years: sailing down the Giudecca canal to the passenger terminal, passing iconic spots like St Mark’s Square and the Doge’s Palace. This is as much an aesthetic worry as an environmental one, say Fagarazzi and Duflot. Like many locals, they despair at the looming cruise ships that dwarf the spires and palaces of the old city, marring its fabulous skyline.

For this reason – as much as for environmental ones – some Venetians support moving the cruise terminal away from the city altogether. Backed by the Port Authority and the mayor, the most popular idea is to transform the industrial port of Marghera, on the mainland a few miles from Venice, into a terminal for cruise ships. This would avoid sending the vessels through the Giudecca canal, limiting their environmental impact and protecting the view. “We foresee vessels entering the port through the Malamocco inlet and sailing along channels used by cargo ships, up to Porto Marghera,” explains Musolino. “There, big cruise ships can easily dock along quays that face free areas where new cruise terminals and infrastructure can be created. [This is] an economically and environmentally sustainable solution that prevents big vessels from passing in front of St Mark’s Square.”

Di Marco agrees that the status quo is unsustainable but is sceptical about Porto Marghera. “For us, the Marittima [home of the current passenger terminal] is the best solution,” he says. “It is very well connected with downtown Venice and has the important infrastructure that could take you to the town. Arriving at the Marittima is like being on the sofa [at home], rather than being in the kitchen.”

Instead, Di Marco suggests adapting the Vittorio Emanuele canal, built in the 1930s. Ships would still end up at the current terminal but would no longer sail so close to the city. Though he agrees that Marghera might be a solution in future – vessels longer than 340m cannot sail to the Marittima – Di Marco stresses that the cruise lines need an interim solution soon. “We need to plan and organise for the 2018 season,” he says. “Although these things are very simple, they are also complicated. The companies have to plan the packages at least a year before, because they have to reserve the dock and the terminal. [They] also have to organise all the trips that they sell to tourists.”

These arguments are vital to the future of the Venetian cruise industry. But until the government in Rome sorts things out, change looks unlikely. Even if the current administration does reach a decision, it may not be around to implement it. Parliamentary elections are due next year, with the proenvironment Five Star Movement looking strong. Local politics might also smash any arrangement. In October 2017, the Veneto region goes to the polls in an unofficial autonomy referendum. Though the result isn’t binding, a victory for the separatists would cause even more uncertainty.

Cruise companies have plenty of new ways to help Venice out in the meantime. One big hope is liquefied natural gas (LNG), which produces 30% less carbon dioxide than normal fuel. However, ports also have a role to play, notes Musolino. “We have to be ready to offer new infrastructure for distributing LNG in port,” he says. “We are working with several partners to make sure [we] have a dedicated terminal in Porto Marghera for managing and distributing the LNG to cruises and cargo vessels, but also to landside users.”

Musolino is convinced that Venice can thrive as a sustainable cruise destination through intelligent, progressive measures. “In the future, the cruise sector will be even greener, more sustainable and more integrated with cities,” he says. “We can do this by focusing resources and investments on innovative policies and projects, without abandoning the path followed in recent decades that made Venice the leading cruise port of the whole Adriatic area. We have a great opportunity to show the world that Venice can be innovative to solve a sustainability problem that involves several different interests.”

That last line is telling. While the cruise companies themselves are clearly willing to compromise, they are not the only group fighting for Venice. If the liners can’t convince regular Venetians of their worth, their survival in the city is shaky. Venice might be a box of chocolates, but a decent future for the town – and the cruise ships – involves sharing the sweets equally. 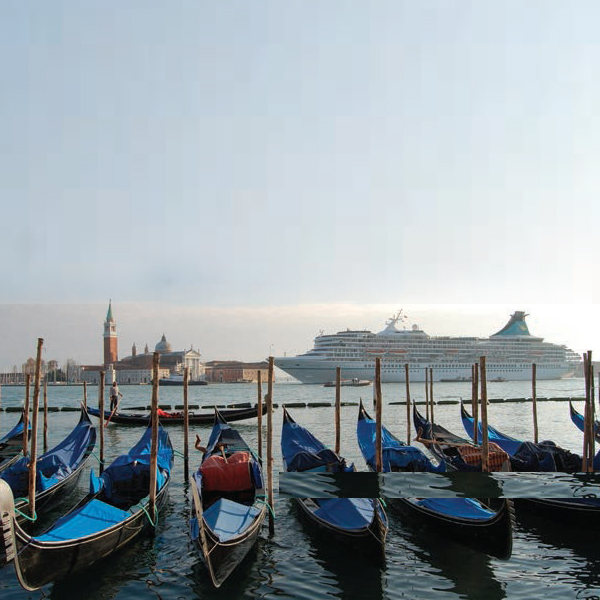 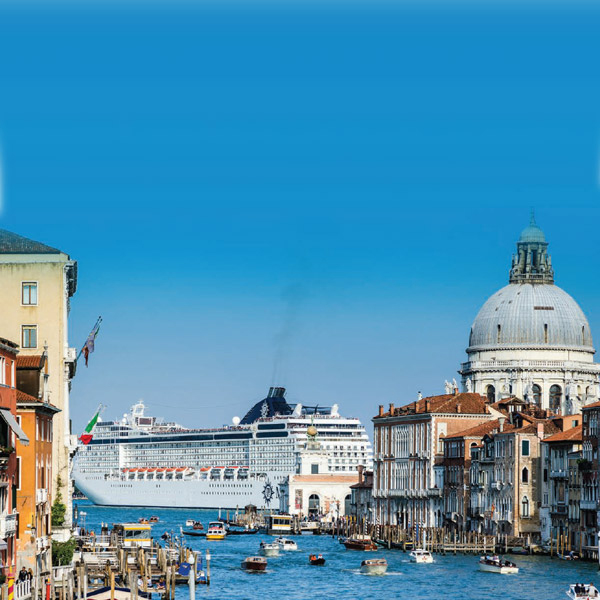 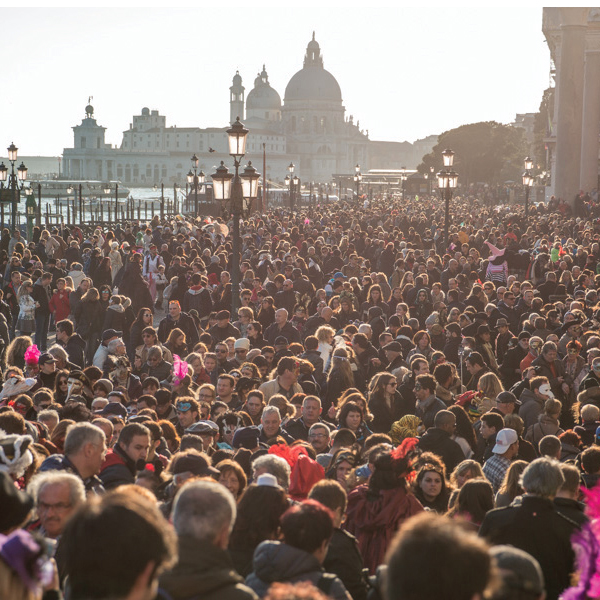 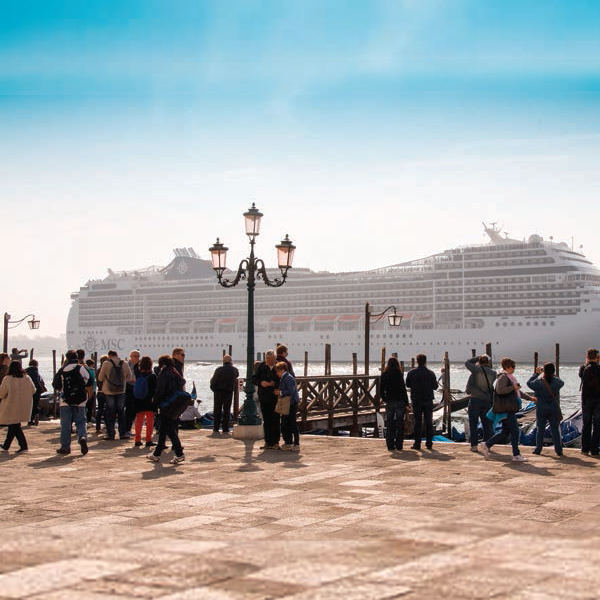 A cruise ship passes St Mark’s in Venice.
Post to: