Sail to a greener future – inside the Ecoship project

The Ecoship project, for the designing and building of a cruise vessel that will carry out humanitarian and environmental missions for Japan-based NGO Peace Boat from 2020, has been finalised and initial funding secured, with construction scheduled to commence in April 2017. The ship, which will incorporate ten solar-powered sails, retractable wind generators and hybrid engines, has been touted as the greenest cruise vessel in the world, but could it also viably be the cruise ship of the future?

It is hoped that future generations will look back favourably upon December’s UN climate change summit in Paris, COP21, and recall it as the moment the world finally agreed on a global, legally binding plan to reduce emissions and limit the extent of man-made global warming to less than 2°C above pre-industrial levels. Beyond the headline news, however, the conference of the parties served, as others have, as an opportunity for public and private organisations to discuss the environmental issues facing different sectors and industries. In doing so, a few other historical developments may have started to quietly take form.

Shipping, the means of transportation for more than 90% of global trade, took the spotlight at several conference sessions at the Paris talks, where its role in the long-term solution to climate change was discussed. In the wake of the summit, debate is picking up regarding the prospect of a carbon tax for the shipping sector, as has been proposed by the International Monetary Fund and roundly rejected by the International Chamber of Shipping.

A small but quietly radical project was meanwhile making its mark on COP21. Peace Boat, a Japanese non-profit organisation dedicated to promoting human rights and environmental sustainability through ‘peace voyages’ on a chartered passenger ship, used the summit to announce that it had finalised the design for a new ship that it touted as “the world’s greenest cruise ship”.

A few months later, at Seatrade Cruise Global, the concept moved closer to becoming a reality. It was announced that a memorandum of understanding had been signed with Singapore-based Six Capital to raise $100 million for the construction of the ship in a crowd-funding scheme. The operator also unveiled a timeline for the building of the vessel, with plans to select a shipyard in October or November 2016 and the contract coming into force in April 2017. Construction is set to take place between April 2017 and February 2020, with its maiden journey scheduled for April 2020.

“We are particularly excited to be part of this movement, as it is about what the ship can create – a global movement for people to understand climate change,” Patrick Teng, founder, chief dealer and executive chairman of Six Capital, declared upon the agreement.

The public face of environmental shipping

The Ecoship, as the concept has been dubbed, has been developed by a team of over 30 engineers and experts in shipbuilding and environmental design, and its architectural design is provided by Spanish design firm Oliver Design. It is intended to realise Peace Boat’s vision of a mobile ‘floating village’ that educates, carries out research and hosts green technology exhibitions around the world, incorporating technology that “will minimise environmental impact to an extent that surpasses the current best in practice”. The developers of the 55,000t vessel believe it will provide inspiration and proof-of-concept for eco-conscious cruise operation that could spread to the passenger shipping sector.

“Peace Boat’s 2020 launch of the Ecoship offers a vision for a climate-friendly future and leads the way towards a green cruising model that could impact the wider shipping industry,” says Peace Boat founder and director Yoshioka Tatsuya. “The industry must adapt to the planet’s needs.”

Although the cruise sector’s marine emissions could be described as minimal compared with the thousands of cargo ships, container giants and chemical tankers that ply the world’s maritime trade routes, the organisation hopes that promoting change in the public-facing cruise industry will help shift environmental expectations across the shipping world.

As the founders of the project declared, “While the cruise industry represents only a tiny fraction of world shipping, it still comprises hundreds of large ships visiting pristine marine areas, and must contribute to the agenda of solutions. Further, cruising is the most visible interaction between modern shipping and the public, and thus has the greatest potential to raise awareness and effect change across the industry as a whole.”

The Ecoship fuses futuristic yet nature-centred design with cutting-edge environmental innovation. From interior design that prioritises eco-friendly living to fuel-efficient architecture, there are plenty of features to discuss.

Even the aesthetics of the Ecoship’s accommodation are bound to its environmental message, with an on-board garden serving as the “heart and lungs of the ship” and cabins designed according to biophilic principles that emphasise humans’ innate connection with nature.

"Peace Boat’s 2020 launch of the Ecoship offers a vision for a climate-friendly future and leads the way towards a green cruising model that could impact the wider shipping industry."

The main opportunity and challenge for the ship when it comes to environmental performance is propulsion. In optimum conditions, the vessel’s ten retractable wind-energy-generating masts and 6,000m² top-deck solar farm will dramatically reduce the use of traditional fuel. Cleaner-burning liquefied natural gas (LNG) will be used as a top-up fuel, and Peace Boat also hopes to future-proof the propulsion system by making it adaptable to the use of biofuel and even kitchen waste as alternative sources of fuel.

Fuel for the future

When asked to comment on the Ecoship and whether cruise operators had plans to incorporate any of its proposed features, the Cruise Lines International Association (CLIA) would not be drawn on specifics but did emphasise the importance of environmental performance in today’s cruise industry.

“Being environmentally conscious and proactive is not just a need for the industry; it’s also a deep desire that is fundamental to how we do business,” a CLIA spokesman said. “From the most stringent wastewater treatment policies in the global maritime community to continuous reductions in air emissions, CLIA members work with regulators and various industry stakeholders to deliver on their commitment to the environment.”

While the global cruise fleet is still predominantly using conventional propulsion methods, new-build projects that take a more radical approach to emissions reduction are starting to emerge. In 2015, Carnival, the world’s largest cruise company, announced – as part of an agreement with shipbuilders Meyer Werft and Fincantieri to order nine new-build cruise ships between 2019 and 2022 – four new ships to be built by Meyer Werft that will be entirely powered by LNG, the cleanest-burning fossil fuel.

The ships – two of which will launch for AIDA Cruises while the other two will become part of the Costa Cruises brand – will be the first LNG-powered cruise vessels in the industry. Like other vessel types that have become early adopters of LNG propulsion, these ships will likely serve as effective large-scale demonstration projects, reducing the perception of risk for other cruise operators considering following suit.

With shoreside power facilities (and the on-board technology required to make use of them) gradually spreading, and other ambitious cruise designs continuing to emerge (such as the ultra-efficient ice-breaking cruise vessel unveiled by marine architecture firm Knud E Hansen in September 2015), the cruise industry is evidently taking its early steps on the long road to more-sustainable operation. But with emissions regulations becoming ever stricter and the need to mitigate pollution growing increasingly urgent, an advanced green cruise vessel such as the Ecoship could be, if successful, exactly the kind of giant leap the industry needs. 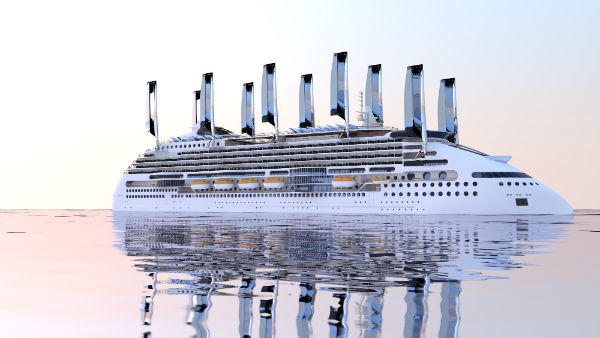 Peace Boat’s Ecoship will generate energy from its retractable masts and a 6,000m² solar farm.
The Ecoship’s on-board garden will feature plants from around the world, which will be fed by rainwater and organic waste for a truly green offering.

The Ecoship’s design is inspired by the body of a humpback whale.
Post to: