It’s the largest ship ever built for the UK sector, and the fourth vessel in just ten years from P&O Cruises. But what will Britannia bring to the market and how original is its design? Shortly before the ship’s maiden voyage, Stephen Cresswell meets David Pickett, Carnival UK’s head of new builds, to talk British identity, steep learning curves and bringing new blood into cruise architecture.

When it leaves its home port of Southampton for the first time on 10 March, there'll be no mistaking the identity of P&O Cruises' latest vessel; plastered across its hull in 420L of paint is the largest contemporary version of the Union Jack ever conceived. Just beneath, painted in a vivid blue, the ship's name, Britannia, pays further patriotic testament to the importance of heritage and national identity.

And if any cruise company deserves to use the colours of the British flag as livery, it's P&O. There was a time, between the 1840s and 1870s, where almost all contact between the UK and major trade areas - India, Japan, China and Australia - was instigated by the line. Not only is it now the biggest home-grown operator in the UK, it's also the oldest operating cruise company in the world.

That rich heritage - spanning over 150 years - can be easy to forget in an age of megaships. But, over the last ten years, the company has been quietly and confidently expanding.

In 2004, it launched Arcadia; in 2008, Venturawas christened; in 2010, Azura set sail. And now, after a gap of five years, the largest of them all - Britannia - is set to cruise towards the Mediterranean after a successful sea trial late last year.

At the heart of the latest project has been David Pickett, Carnival UK's head of new build. For the last three years he's been leading the design of the vessel: commissioning architects, dealing with design approval and working alongside shipbuilders Fincantieri. At the time of our interview, just 11 days before Britannia is set to leave the Monfalcone yard, he's brimming with excitement. This is, after all, P&O's largest ship to date, and a big signal of the company's intent and ambition.

"In so many cruise ships the designers indulge themselves in themed places and spaces. Here the design of the ship is consistent."

"It will add 25% to our lower berth capacity in one fell swoop," he says. "The last two ships we built - Ventura and Azura - represented a massive increase in the size of the company, and, with 3,600 passengers, this will too. After the expansion we've seen over the last ten years, I think we're putting all the best things we have into this ship."

In terms of construction, the new vessel owes a lot to MS Royal Princess, launched in 2012 by Princess Cruises. Both groups - Princess and P&O - belong to Carnival Corporation, and to avoid the expense of designing entirely new hull forms, engineering knowledge has been shared strategically across the companies.

"Having such close contact with Carnival Corp shipbuilding means we have a great circulation of information," Pickett says. "We're able to share best practice and leverage the knowledge within the company. The ship platform is a Royal Princess hull form, and all of the machinery - the hull, the lifesaving appliances and the technical marine aspects are virtually identical to Royal Princess which was delivered a couple of years ago. Even the operational aspects of the ship are similar. Most of the senior officers on board have spent time on Royal or Regal Princess and learnt how it should be driven and maintained. It was a very natural thing to work with Princess Cruises and Carnival shipbuilding to find a way of developing the Royal Princess hull to suit the needs of P&O cruises."

Despite sharing the same platform as Royal Princess, Britannia is still very much its own ship. From the outside, the Union Jack, twin blue funnels and rising sun motif gives the ship a unique appearance. But it's inside, in the ship's architecture and design, that Britannia's originality is most striking.

Instead of commissioning experienced cruise ship architects, P&O decided to use the expertise of Richmond International, a London-based design company most known for its work with international hotel chains. The idea, Pickett says, was to bring the feel and consistency of a high-end luxury hotel into a cruise ship.

"We wanted to bring some fresh blood into ship architecture and create the feel of a hotel," he says. "So we used a team that had a strong reputation in international hotels and knew how to deliver a very elegant design. In so many cruise ships the designers indulge themselves in themed places and spaces. Here the design of the ship is consistent. It has a contemporary British feel and reflects what we're seeing in a lot of London hotels at the moment. There's classical elements mixed with clean, undecorated, well-proportioned design with consistent, good-quality materials and an emphasis on authenticity."

Using a company with so little experience of the cruise sector was a bold move by P&O. Before working on Britannia, Richmond International had designed just one set of rooms on a single ship.

"We are very much a brand designed for the British market, and this ship reflects that. The public spaces that we offer, the entertainment and the food are really geared to what we think British customers will like."

"It was a steep learning curve for them," Pickett admits. "Working closely with us and their counterpart architects at the shipyard, with all the marine rules, regulations about escapes, lighting levels and certified materials posed a lot of challenges. It meant restrictions on their design palette but also gave them the opportunity to think hard about solutions. The design is now finished and it's been a huge success."

Bringing a new face into ship architecture isn't the only way P&O has managed to distinguish Britannia from other ships within the Carnival group's fleet and beyond. Many of the features used in P&O's signature brands have been included to tie in with the specific British context. At the forward end of the ship there's the familiar panoramic crow's nest. And on the menu, there's the equally familiar Sindhu, offering high-class Asian food and emphasising P&O Cruises long-standing affiliation with the East.

"We are very much a brand designed for the British market, and this ship reflects that," Pickett says. "The public spaces that we offer, the entertainment and the food are really geared to what we think British customers will like. With Princess Cruises, the clientele is more transatlantic, which means it's a largely American product. We do things in a different way."

As well as using P&O signature brands, Britanniawill also be experimenting with new concepts. An entire space dedicated to ballroom dancing has been included to cater for the British public's obsession with televised celebrity dance contests. A cookery club offering a space for 24 passengers to develop their skills with celebrity chefs is another Britannia feature and another nod to fans of contemporary British television. And a starburst chandelier drooping from the atrium ceiling gives the ship the kind of flair even seasoned cruisers will be struck by.

It hasn't even begun its maiden voyage, but the success of Britannia is already being used to improve the rest of P&O's fleet. Last December during a refit, Aurora had a new Union Jack painted onto its hull, and other design improvements are being introduced into other ships.

"Our fleet is by no means static," Pickett says. "We like to learn from our other ships and so we're already seeing aspects of design on this ship being rolled back in refits on other ones. Some of the designs we've used for Britannia have been used as an expression of our rebranding. It's about a new look for P&O cruises that represents the way we are moving."

During the European season, Britannia will set sail towards the Mediterranean, taking in the Norwegian Fjords, the Canary Islands and the Baltic Sea. Over the summer, the ship will move to the Caribbean for a 15-day itinerary including Barbados, Aruba, Grand Cayman and Ocho Rios. They're impressive places, but, after four years of work on Britannia, you can't help but imagine that some part of Pickett and the P&O team must hope the customers won't want to get off. 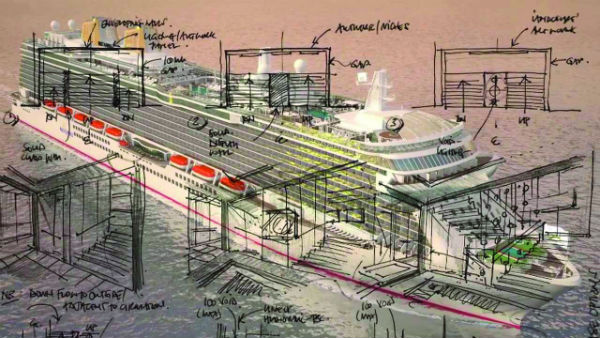 Britannia’s core structure is based upon the hull form of MS Royal Princess; adaptations were then made to ensure the ship appeals to British passengers, and familiar P&O features, such as the crow’s nest, were added. 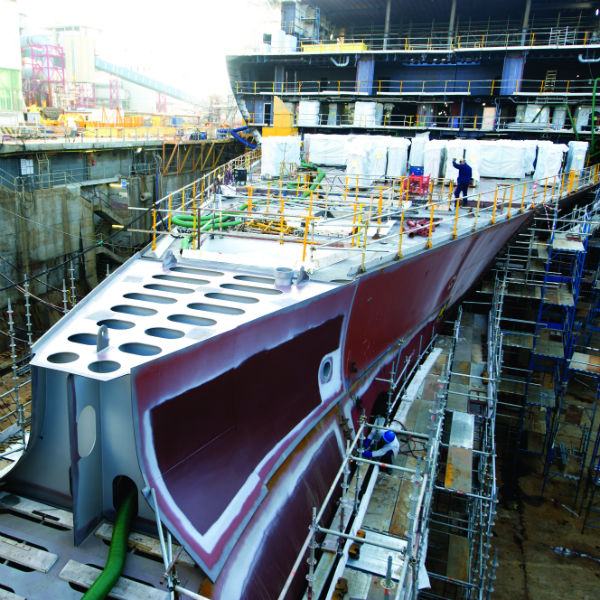 The ship was manufactured for P&O Cruises in Monfalcone yard, Italy, by shipbuilders Fincantieri, with interiors by UK-based design firm Richmond International, known for its work – on land – with international hotel chains.