New Zealand seems to be the perfect destination for a cruise holiday, with a long coastline of staggering beauty giving way to a dramatic mountainside background. Only recently, however, has the country come into its own as one of the sector’s most exciting destinations. Will Moffitt talks to Stuart Allison, Princess Cruises’ vice-president for the Asia-Pacific region, about the triumphs and tribulations involved in building a cruise business in the land of the long white cloud.

In Maori tradition, Aotearoa was first discovered by an explorer named Kupe, who travelled to these isolated islands from the spirit world of Hawaiki. His journey had been long and suitably dramatic. Legend has it that Kupe and his people journeyed across the vast Pacific Ocean in pursuit of a giant octopus named Te Wheke, who had been making light work of their normally plentiful supply of fish.

Travelling in Waka war canoes, the Maori clan engaged in a series of epic battles with the creature, a chase that led them to a body of water between two islands, whose mountains were crowned with mist. This sight led Kupe’s wife, Kuramarotini, to name this place Aotearoa, or ‘land of the long white cloud’. Kupe, along with his compatriots, left promptly after slaying Te Wheke, naming many of the locations he passed before vowing never to return to the land he had discovered.

Centuries later, Dutch cartographers who had never seen Aotearoa renamed it New Zealand, after one of their native provinces. The name stuck, but it’s safe to say that the rising number of tourists who flock to the islands each year are not there to remind themselves about flat, reclaimed farmland. Rather, they too share in Kuramarotini’s initial sense of wonder at New Zealand’s jagged mountains, rolling Edenic pastures, raging rivers and steep fjords.

Historically, cruising has brought in a small but steady stream of travellers to New Zealand, with many coming from Australia and the South Pacific; although adventure cruises bound for Antarctica also pass through, as well as the occasional roundthe- world tour.

While it constitutes a small fraction of the global market, there are growing signs that the land of the long white cloud is cruising into sunny pastures. Recently, the country has seen an upsurge in locals taking to the water alongside a growing clientele of overseas visitors, particularly from Australia, North America and Europe.

Figures released by CLIA show passenger growth averaging 13.5% each year over the past decade, making it well ahead of the growth rate of the world’s more established cruise markets, including the US (9.4%) and Europe (3.3%).

Unsurprisingly, this increase in popularity has coincided with the widening of the Panama Canal, enabling greater access to southern hemisphere destinations, coupled with further investment in ports and regional infrastructure.

Some 27,000 New Zealanders cruised in local waters in 2018, an 18.1% increase from the previous year. Alongside this local upsurge is a growing overseas clientele with an estimated 348,000 cruise tourists expected in the coming season, contributing a predicted $695 million to the local economy.

For Stuart Allison, vice-president of Princess Cruises for the Asia-Pacific region, the country is mainly proving popular due to its compact array of unique locations. “New Zealand is a perfect cruise destination – in less than two weeks you get to experience seven or eight destinations around the country with an incredible mix of cultures, dramatic landscapes, and warm and welcoming people,” he explains. “We see great potential in New Zealand, and that’s why we’ve chosen to bring our biggest and most modern ships to cruise there.”

In May, the cruise line announced its largest Australia and New Zealand offering to date, with a total of five ships scheduled to service the 2020–21 season, offering a capacity of more than 220,000 guests.

The company currently runs 20 itineraries on its New Zealand tours, the most common being the trans-Tasman route, which typically starts in Sydney before crossing the eponymous sea and moving on to the deep lakes of Fiordland in the South. A number of these tours are short stays of eight nights or less, a market that has proved popular with New Zealand’s noisy neighbours.

“New Zealand has always been the destination of choice for Australians,” Allison says, “but in recent years the local market has seen significant growth in short Australian coastal cruises of less than seven nights, which are drawing many first-time cruisers to the region.”

Royal Caribbean runs a similar model, marketing the Tasman route as an opportunity to see two countries and two different landscapes in one. It also delves into Hobbit fandom, inviting travellers to “follow in Frodo’s footsteps”.

Meanwhile, smaller luxury operators are taking an interest, seeing the remote bays, hidden harbours and rugged coastline of the region as the perfect backdrop for more remote adventures. Ponant, the French expeditionary outfit, runs 10-day tours aboard its agile explorer-class ships, cruising through the pristine fjords of the South Island before stopping in Wellington and finishing up in the volcanic springs of Tauranga.

While this influx of cruisers is undoubtedly beneficial to the New Zealand economy, it remains to be seen whether the country is significantly well equipped to cater for large vessels and boatloads of tourists, particularly in smaller, less-developed areas.

“New Zealand is a perfect cruise destination – in less than two weeks you get to experience seven or eight destinations around the country with an incredible mix of cultures, dramatic landscapes, and warm and welcoming people.”

Akaroa, for instance, has a population of 625 people, with some residents complaining about feeling overwhelmed by boats that carry an average of 1,625 passengers. The locals also argue that these vessels are damaging their pristine harbour environment.

This issue is largely double-edged, given that for many local businesses the cruise boon is an exciting opportunity, as cruise ships deliver boatloads of customers to their door. It could also encourage younger residents to stay in local areas that can now guarantee better-paid jobs.

Cruising should also encourage partnerships between local workers and cruise operators, providing local craftsman with an opportunity to showcase artisan products as they become part of itineraries offering local experiences. Princess Cruises has already glimpsed this opportunity, seeding funds to develop a local market in the Bay of Plenty that features indigenous businesses.

13.5%
New Zealand passenger growth year-on-year over the past decade.
CLIA

“More capacity in the region should mean more opportunities for everyone, not just travel agents and cruise operators,” Allison says. “We asked the community at the Waitangi marae reservation what would make a difference to them. The feedback was that they wanted to create and operate a market that would showcase Maori-made arts, crafts and culture for cruise tourists.”

The company now promotes the Maori markets to guests on board, while assisting the community to better understand cruising and “what guests are looking for”.

“The Maori community is taking small steps to develop their new enterprise so they learn along the way and make it sustainable. We think the markets could create a more enriching experience for cruise tourists and create a greater connection with Maori culture,” Allison says.

To cater for this incoming influx of travellers, hard work is at hand to expand and improve port facilities. The most dramatic of these alterations is at Lyttelton, Christchurch, where a $60 million cruise berth is being constructed, making it New Zealand’s first custombuilt cruise ship facility. The project is scheduled to be finished in late 2020, but once complete it should take the pressure off Akaroa, which has served as the main inlet for the Christchurch and Canterbury region since the 2011 earthquake damaged the original berth.

625
Population of Akaroa, some of whom have felt overwhelmed by cruises arriving carrying over 1,500 passengers.
Stuff

Similar improvements include the construction of two temporary mooring points, known as dolphins, at Queens Wharf in Auckland, meaning it will soon be able to berth all forms of cruise ships. Larger ships currently have to anchor in Waitemata Harbour and transfer passengers and crew to shore in tender boats, a slow and tedious process for the thousands of people on board.

As infrastructure continues to improve, Allison is more than confident that the local ports will be able to accommodate this growing stream of vessels.

“New Zealand is blessed with a number of ports than can accommodate large ships alongside the berth. On a typical 13-day Princess cruise from Sydney, guests can step off the ship onto the pier in five out of seven ports. This makes for a great guest experience. A lot was done locally to ensure the market was ready to accommodate the Majestic Princess in her first season, including the expansion of shore excursions to accommodate many of her 3,560 guests,” he explains.

While Allison accepts that some of New Zealand’s smaller harbours might not all have sufficient capacity for the largest ships, he insists that the cruise line has this covered in the form of the Pacific Princess.

The smaller boutique ship, which houses 670 passengers, has opened up new itineraries and calls to less-visited ports, including a new 13-night itinerary that will see the Princess cruise from Australia to Stewart Island, making it the first ship in the fleet to complete the route directly.

A fragile beauty that must be protected

As more ships cruise the region, one of the country’s biggest anxieties is that these vessels end up destroying the countries unspoiled natural landscapes. There is already a certain amount of local policing around this issue, particularly in some of the country’s more precious locations.

With its sheer rock faces and cliffs rising vertically from dark waters, and majestic peaks and cascading waterfalls, Milford Sound – a fjord in New Zealand’s South Island – is widely regarded as one of the world’s most beautiful travel spots. Its jaw-dropping scenery is acknowledged as fragile – but as popular in New Zealand cruising as the Vatican is to Rome. To protect it, cruise lines have agreed to stagger their visits to ensure the environment – and the cruise experience – is preserved.

Meanwhile, Southland Regional Council has a long-standing agreement with cruise lines visiting Fiordland and Stewart Island, where a maximum of two ships are allowed in waterways at any one time. Cruise companies risk being banned if they fail to abide by these environmental conditions. This is a particularly contentious issue given that New Zealand is yet to sign up to the international maritime convention on sulphur reduction. Despite this lack of formal agreement, however, CLIA maintains that cruise lines visiting New Zealand will abide by international standards

“The international cruise industry is committed to meeting the emissions requirements of the International Maritime Organization’s Marpol Annex VI provisions by 1 January 2020, within New Zealand and internationally,” said CLIA in a recent statement.

Firm policing will be required to ensure these regulations are abided by, otherwise visitors will only end up damaging the fragile and idyllic landscapes they have come to see.

While there is still much work to be done to prepare for another season, the future looks sunny and bright for the cruise industry in New Zealand, as a recordbreaking number of travellers are set to make the pilgrimage to the land of the long white cloud. 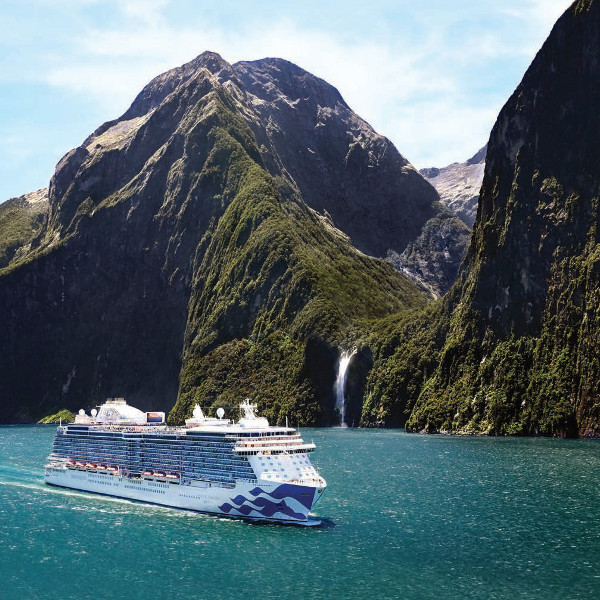 Majestic Prinecess cruising among the breathtaking scenery of the Milford Sound. 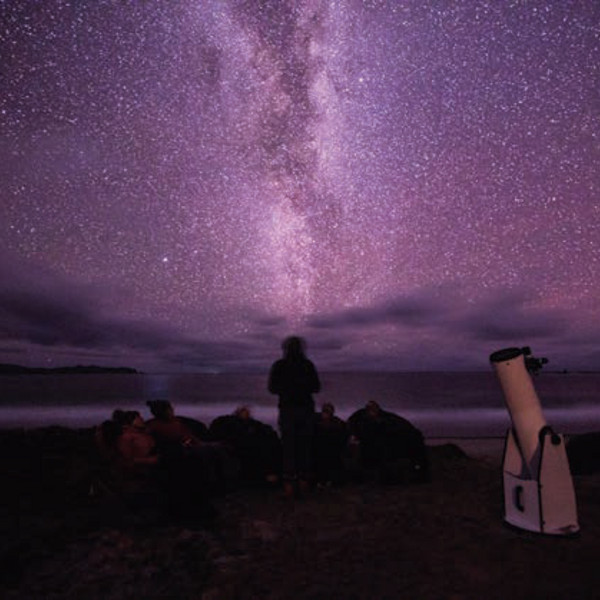 The night sky at Great Barrier Island.
Post to: