Get your act together

Richard Ambrose once lost 800 people during a performance on a cruise ship. The production was a re-enactment of a musical revue penned by John Kander and Fred Ebb called And the World Goes ‘Round. By the final crescendo, however, it felt like most of the earth had left.

“It was beautiful. It really was,” Ambrose recalls. “Everything about it was perfect. It was on the Norwegian Jade, which had a 1,000-seat theatre. We started that show with a full house, but when the show ended we had 200 people in the audience.”

Many successful shows later Ambrose can laugh the incident off, but this indelible image of an almost empty theatre, and a stage brimming with “top-notch talent”, is burned into his memory.

When it comes to seafaring shows, there are a few principles worth remembering. In this case: know your audience.

“I was like, ‘wow, we overshot that’, but these are the lessons that you learn. It wasn’t what the audience wanted. They were so used to big visuals, costume changes and all the aerial [and acrobatic] kind of stuff,” Ambrose explains. “So, I had to take a step back and find a way to bring them in a little more slowly.”

Far from simply averting a mass exodus, Ambrose’s next production was a fast-paced, glitzy dance number called Elements. 12 years later the show is still going strong, and regularly pulls in guests for second and third viewings.

While this move back to more familiar ground yielded positive results, Ambrose dismisses the idea that cruise entertainment is solely about giving the audience what its wants. Instead, his guiding mantra as vice-president of entertainment at Norwegian has been that “creativity and storytelling must always come first”.

In fact, it was this desire for bold, attentiongrabbing spectacles and Broadway-standard performances that first drew him to the cruise line 13 years ago, when it outlined its plan to reinvent the theatrical experience.

You’re gonna be a star!

“Norwegian said: ‘we want Broadway’, and I said: ‘well, you can’t have Broadway; Broadway is in New York.’ But I knew what they meant,” Ambrose explains. “They wanted the talent, they wanted the production values... what they wanted, and what we have delivered, is that first-class quality Broadway experience.” Since then, the standard of cruise theatre has developed across the board, benefitting from greater investment and creative control, as cruise lines deliver high-calibre renditions of West End and Broadway productions.

For Royal Caribbean and Norwegian, these include classics like Mamma Mia and Rock of Ages respectively, while Disney Cruise Lines has made it a calling to deliver performances of Frozen and Beauty and the Beast to a younger clientele.

Theatre-themed cruises are also being launched, with Norwegian’s subsidiary entertainment company Sixthman initially set to debut a fournight Broadway Cruise this October, prior to the disruption caused by COVID-19.

According to Jane LaFave, business development manager at Sixthman, the idea has been in the works for some time and, “many brainstorms later”, the final product is designed to marry intimate and grand-scale shows featuring stars like Alan Cummings and Laura Benanti, with workshops from industry professionals.

“We’re planning on having panels with casting directors and people who work behind the scenes in the Broadway world,” LaFave explains. “So not only are you watching great shows, but if you’ve always wondered what it takes to make it, we’re going to have experts who can share their advice.”

As an ex-professional dancer, Ambrose has seen this enthusiasm for cruise theatre develop substantially since his performing career ended, a time when doing cruise theatre was not such an attractive proposition.

“I’ve always said that cruise lines were the last form of theatre that you wanted to do. I’m a former performer and I never did cruises, but that was years ago,” Ambrose says. “The perception of Norwegian has changed. People look at us and they want to work for us, because now we have big name talent.”

Those talents include renowned choreographer Patricia Wilcox, the brains behind Elements, who was nominated for an Astaire Award for her work on Motown: The Musical, and Warren Carlyle who directed the Broadway hit After Midnight.

Ambrose lights up when discussing the aforementioned duo, who represent the culmination of an arduous journey to elevate standards at Norwegian. Not bad going for someone who struggled to get a phone call returned when he first started.

“Talent is always the last thing that will come. And it took us five years get to a baseline where I was used to working,” Ambrose says. “We had a lot of work to do with contracts, living conditions, production values, how shows were operated, all that back-of-house stuff that the audience doesn’t see, but [it’s what] attracts talented people to come and work for us.”

This five-year plan to improve production quality began with some major adjustments. All creative control was surrendered to Ambrose, who brought production in-house to a base in Tampa, Florida, monitoring rehearsals and refining shows to his rigorous standards. Around 270 performers are housed in this state-of-the-art facility for three to four months, before a set of 12 actors board a ship where they will typically reside for half the year, performing four shows a week.

Within the confines of the base, a giant metallic warehouse, every detail of a performance is meticulously planned, from dance routines and a cappella harmonies to the 60,000 individual items of costume, all of which have been specifically tailored to survive the humidity and salt water that comes with being at sea for extended periods.

Meanwhile, the standard for performers is invariably high, with Ambrose and his team scouring the globe for ‘triple threats’, and those who can also, perhaps most importantly, keep the drama on stage.

“We’re looking for people that can dance, sing and, on our big ships, they need to be able to act. We’re also really looking for a personality, somebody who’s going to shine on stage,” Ambrose explains. “Then, we’ve got to make sure that these people are going to be great crew members, because working on a ship is just different... you don’t get to go home.”

Alongside talent spotting and gruelling rehearsal schedules, a key challenge is adapting Broadway favourites to suit the specific parameters of the cruise ship model. Naturally, most of these productions are developed for the expansive proportions afforded by theatres with large stages and ample storage space. Mapping out walk-ins and costume changes to suit the dimensions of a cruise ship is therefore a tricky proposition, and one that can only be solved through meticulous planning.

Then there’s the script itself. Invariably, taking a two-hour show and whittling it down to a less daunting runtime, without compromising the original storyline, is no mean feat. And scenes have to be reconfigured to suit audience tastes. While a scene from the West End or Broadway might be inserted simply to facilitate a wardrobe change, Ambrose does not have that luxury.

“On the ships, the shows have got to move like a locomotive, because our competition is the buffet, the casino, the sun... We give guests a chance to get up and go and they’re gone,” Ambrose says. “The only thing there to hold them in the theatre is the show itself, and the talent on show.”

To achieve a successful edit and ensure that the essence of the story is communicated in a form that will keep guests entertained, the original creators are often brought in to help. For Norwegian’s debut production of the jukebox musical Jersey Boys, original director Des McAnuff and choreographer Serge Ortiz were drafted in to help cut the show’s standard runtime of two and half hours to a lean 110 minutes.

Working relationships such as these have only enhanced the links between land and sea, opening up opportunities to cruise line actors – some of whom have been called up to fill vacancies on Broadway and in the West End.

“On the ships, the shows have got to move like a locomotive, because our competition is the buffet, the casino, the sun... we give guests a chance to get up and go and they’re gone.”

For Ambrose, a more transparent dialogue between the two is only serving to remove the stigma around cruise theatre, as former cruise performers are demonstrating their talents in renowned productions in New York and London, and talented performers working in the latter are more receptive to the benefits working in the cruise game can afford.

While there are certain disadvantages to doing cruise theatre – long periods at sea, little contact with friends and family, and a degree of cabin fever that we can all empathise with right now – there are many benefits too.

“This can be a really good gig. It’s well paid and, at Norwegian, you get to perform in top-quality productions working with some of the best creatives in the world,” Ambrose says. “Then, if you time it right, you can be out of New York, or out of London in the winter, and in the Caribbean.”

For now, despite the inevitable disruption caused by the COVID-19 pandemic, Ambrose is excited about the future. Most notably, with a six-strong fleet of Leonardo-class ships that have been carefully designed with the theatrical experience in mind.

“They’re going to have fly space, storage, all of the back-of-house stuff we don’t usually get, because, ordinarily, theatres are built by ship engineers who don’t think about what’s required to run first-class quality productions,” Ambrose says. “This is going to move us forward and enable us to do so many things. So, for me, the future looks very exciting.” 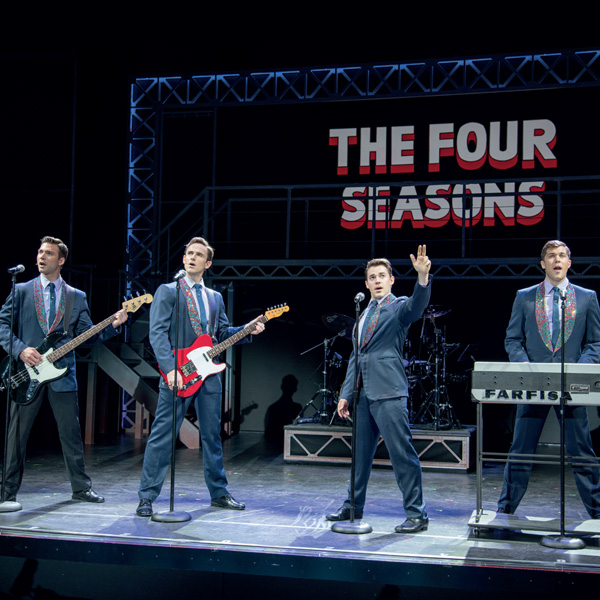 For Norwegian’s Jersey Boys production, the original Broadway director and choreographer were drafted in to adapt it for a cruise audience.
Post to: