Cap it all – engine room efficiency

Engine room efficiency is becoming a top priority for cruise lines. As they scramble to meet regulatory deadlines regarding emissions and overall fuel reduction, operators are looking towards a new generation of engine upgrades and installations. But how can they ensure their ships are adequately prepared for the years ahead? Jens Kohlmann, principal technical manager of shipbuilding at AIDA Cruises, and Ari Rakkola, senior marine engineer at STX Finland, discuss the possibilities for newbuilds and existing vessels.

It's undoubtedly an important time for anyone concerned with cruise ships' effect on the environment. Faced with a slew of regulations, which are set only to increase in the years ahead, the industry is being held firmly to account, and pressure from all sides is mounting.

This is not a new situation, of course. Marine pollution came under scrutiny as early as the 1970s, when the International Convention for the Prevention of Pollution from Ships (MARPOL) was adopted in response to a growing environmental lobby. But while it has long been on the public radar, only recently has the issue been treated with such urgency.

Over the past few years, we have seen the introduction of various emissions control areas (ECAs), most notably around the Baltic Sea, the North Sea and the North American coastline. These impose particularly strict controls on any vessels passing through, no matter where their country of origin. Since August 2012, ships operating in ECAs have been forced to cap their fuel sulphur content at 1.0%, with the limit dropping to 0.1% in January 2015.

With this latest deadline only months away, operators have no choice but to make the necessary changes. There is no time for delay: either they must switch fuel type or add in technology that will help them comply.

"If you are not planning to install any technical solutions for reducing sulphur-based emissions in exhaust gas, you have to use low-sulphur fuels such as marine gas oil [MGO]," explains Ari Rakkola, senior marine engineer at STX Finland. "The price of MGO is much higher than the heavy fuel oil [HFO] they are now using."

Some cruise lines are readily availing themselves of the low-sulphur fuel option. Crystal Cruises, for instance, will be using MGO on its new ship Crystal Serenity, which is due to embark on its maiden voyage in 2016. This has the advantage of cutting emissions without the need for expensive supplementary technologies.

Other cruise lines, however, have balked at the idea of nearly doubling their fuel costs, which are volatile at the best of times, and are seeking out alternative approaches.

One company doing just that is Carnival Corporation. In September 2013, the market leader announced it would install scrubbers on 42 ships, with a following announcement seeing a further 15 further added to that list. These chemical filtration systems remove nitrogen, sulphur and particulate matter from exhaust, in other words 'scrubbing' the fuel of dangerous pollutants.

While scrubbers in themselves have been around a while, previous attempts were stymied by their unwieldiness; this latest generation marks a real milestone for the industry.

Set to be installed by 2016, the ECO Exhaust-Gas Cleaning (ECO-EGC) solution reduces emissions by 90-99%, and will be the first of its kind suited to the space constrictions typically found on a cruise ship.

At Carnival's German line, AIDA Cruises, work is already under way to have the scrubbers fitted onto its ten existing vessels.

"This is cutting-edge technology with a compact design, and it includes all relevant treatment processes like a particulate filter and a scrubber for the sulphur and nitrogen oxides," says Jens Kohlmann, principal technical manager of shipbuilding.

"Our new ships will have all this equipment on board, and we have also now started to refit our existing fleet."

While its interest is understandably piqued with regard to the new technology - AIDAluna and AIDAcara already have the first stage installed - Kohlmann takes pains to emphasise that exhaust filtration is just one component of the cruise line's plan. AIDA is set to invest €100 million in climate protection in the months leading up to 2016.

Emissions reduction, after all, is not the only concern for regulators. Since January 2013, large ships have been legally required to follow International Maritime Organization (IMO) rules on energy efficiency.

Passed as an amendment to MARPOL Annex VI, these new rules are non-prescriptive and performance-based: ship designers are free to use whatever technology they like so long as they hit the required targets.

There is a balance to be struck between cutting air emissions and reducing fuel demands overall, especially if there has been investment in an energy-intensive device like a scrubber.

This means operators need to look beyond the engine room and take a holistic overview of their ship. According to Rakkola, there are four discrete areas in which they can improve their energy efficiency.

"There is room for hydrodynamic improvements - STX Finland estimates that the improvement potential is roughly 1% a year," she says. "There is also room for machinery improvements, with the main focus on waste heat recovery. The steam turbine, in certain operation modes, is an efficient tool to collect waste heat.

"While scrubbers in themselves have been around a while, previous attempts were stymied by their unwieldiness; this latest generation marks a real milestone for the industry."

"There are improvements to be made in heating, ventilation and air conditioning, such as improved chillers and a fan-coil concept for public spaces.

"Then there are the monitoring and energy-management systems, which will create savings based on long-term energy-efficient operational development."

Kohlmann agrees that fuel reduction is a multipronged mission. "The best type of fuel is the fuel that we don't use," he says. "Today, we use 3L per person per 100km. We now cruise many routes at a considerably lower speed and optimise scheduled downtime hours as a method of saving substantial amounts of fuel."

AIDA was investing in the appropriate systems well before Annex VI came into force, and its ships use 20% less energy than they did in 2007. But with fuel savings more critical than ever, it is looking to take energy efficiency to the next level.

Its two newbuilds, currently being produced by Mitsubishi, will feature a new friction-reducing technology, allowing the ship to glide more smoothly and cut 7% of the total operating power.

They will also include some more speculative means of fuel reduction, including the means to plug into a shoreside power source wherever that infrastructure is available.

Initially, this may seem a redundant feature - today's shoreside power is typically no cleaner than the on-board alternatives - but in the long run, it is likely to reap environmental and economic rewards.

Also on the cards are dual engines that can operate on liquefied natural gas (LNG) as well as normal diesel oil. To date, no large cruise ships are powered by LNG alone; the fuel requires a specialised engine and nearly twice as much storage space as diesel. But it has been touted as a key solution for the years ahead, and once the technology advances sufficiently, ships with a hybrid engine will be easily able to make that switch.

Rakkola feels that LNG holds promise for many cruise lines. In the future, she says, operators will want more flexibility to use different types of fuels, and although liquid fossil fuels will dominate for a while longer, the use of LNG and biofuels is likely to keep increasing.

"The technology is proven," she points out. "Cruise ships will need to switch from pressurised C-type tanks to prismatic tanks due to the need for a high volume of LNG on board. Lots of LNG bunkering ports are available, and more are planned."

Features of this kind are all very well on newbuilds, but the question remains - can the requisite fuel savings be made on existing ships?

At STX Finland, the demand for refits is on the rise, due in part to the pressures that surround energy efficiency and air emissions. And while most operators are not making major technological changes, they are working around the margins and optimising what they already have. More comprehensive overhauls may have to wait until LNG becomes a viable fuel source.

In 15 years' time, the typical engine room is likely to look markedly different from those at sea today. Aside from LNG, Rakkola feels that nuclear power might be possible in certain areas, and even batteries over very short distances.

She adds that the energy efficiency of different components will be improved, and waste heat collection possibilities will be operating maximally.

Kohlmann adds that it is vital to pre-empt new regulations. "We always have to think ahead. Our old standards at Carnival were well above the existing standards, and that means that as future standards become more stringent, we will already be well prepared," he says.

After all, any shipowner needs to play pragmatist and futurologist in equal measure. Upgrade your ships too soon, and you risk missing out on the more sophisticated technologies expected a few years down the line; wait too long, and you will be scrambling to meet regulatory targets.

With the latest emissions deadline looming, this is an unfortunate reality for some: according to David Dingle, chief executive of Carnival UK, there is only a 50:50 chance that UK ships will be ready on time.

One thing is clear, though, and that's that regulatory pressures aren't going to die down. We can expect to see ever-more-efficient engine rooms conforming to ever stricter standards. And while the challenges for operators are substantial, so too is the payback. These new generation technologies may be just what the industry needs stay afloat in an increasingly eco-conscious world. 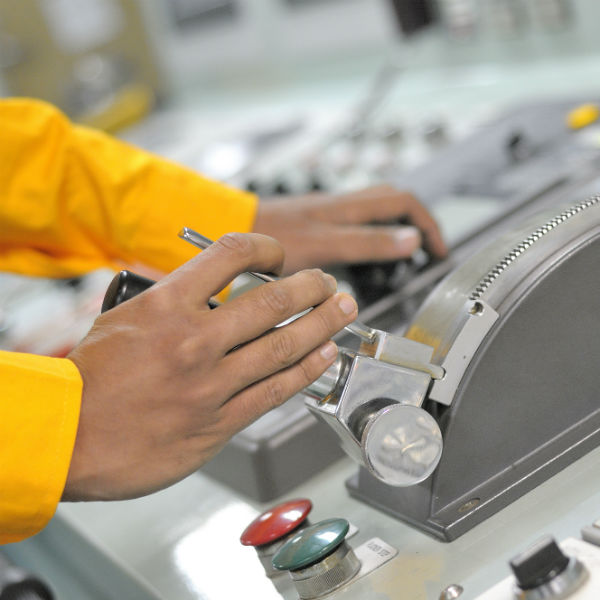