With the €230.6-million acquisition of Nordic Yards’ three shipyards in Wismar, Warnemunde and Stralsund, as well as a string of new investments across the northern European shipbuilding market, Genting Hong Kong has made a bold move that could give it the capacity to dramatically expand Crystal Cruises, Dream Cruises and Star Cruises. Colin Castle examines the nuts and bolts of the agreement, the benefits of the ability to build at an operator’s own pace, and whether cruise lines in the shipbuilding game are set to become the new normal.

It was a bold move for a company already entering choppy waters. Months before announcing losses of between $60 million and $75 million in the first half of the year – albeit losses triggered by an accounting anomaly, the company claimed – Genting Hong Kong told the world that it was going into the shipbuilding business at full throttle.

On 2 March, the company revealed its acquisition of Nordic Yards’ Wismar, Warnemunde and Stralsund shipyards for a hefty price of €230.6 million, and claimed that this would allow it to realise a bold strategy for global growth. Over the next ten years, Genting will be able to massively expand its three brands, Crystal Cruises, Dream Cruises and Star Cruises with the help of its very own shipyards.

“The rapid growth of the world cruise industry, especially in China, has led to cruise-ship order books reaching an all-time high,” Tan Sri Lim Kok Thay, company chairman and CEO, told the press. “In order to ensure that the company can build the required number of cruise ships in the next decade for our global fleet expansion, it is strategic that we acquired shipyards that can build our cruise ships in a timely and more cost-effective manner.”

For anyone paying attention, the acquisition didn’t come as too much of a surprise: Genting has spent much of the past year with its eye on the European shipbuilding market. In September 2015, the company announced it would be investing €17.5 million for a majority stake of 70% in Bremerhaven’s Lloyd Werft shipyard and for a 50% ownership in the shipyard’s land.

“Ownership in Lloyd Werft will enable Genting Hong Kong to leverage the shipyard’s technical expertise, and its well-established and long track record in the shipbuilding industry,” Lim said at the time.

Months later, Genting sealed the deal, purchasing the remaining 30% of Lloyd Werft, and announced the creation of a new company: the Lloyd Werft Group. It is the first of its kind in the industry: a cruise-operator-owned shipyard, oriented towards the needs of the company, and specially managed for the designing and building of cruise ships and megayachts. So what does this mean for Genting?

In short, it means the company will have more time to focus on business. Company literature suggests that delivery timing and pricing uncertainties often associated with the cruise-ship order-book cycles will no longer be an issue, and Genting management can spend its time on strategy, planning and deployment across the three brands.

Putting together a modern cruise ship is a complex and, more importantly, expensive task. Thousands of employees are typically involved, plus hundreds of external suppliers and subcontractors all chipping in for one big project. With so much at stake, shipyards need to be able to coordinate and manage extremely tight construction timelines. Not meeting deadlines can be costly, and there are heavy penalties for delayed delivery or construction that does not meet specifications. It is estimated that around 75% of the value of a cruise ship is provided by external suppliers and subcontractors, and it is essential that the supply chain is reliable, flexible and cost-effective.

For a Chinese company looking to spend big to guarantee control of production lines, northern Europe was really the only option: it is where the leading contractors are based and where almost all major cruise ships are built. The move also allows Genting to take on the amenities of some of the world’s best known shipyards with covered dry docks, meaning that projects can go ahead regardless of weather conditions. The technology that comes with the purchase is far from insignificant: the Straslund shipyard, for example, comes with a ship lift that can launch cruises and megayachts up to 270m long.

“With all the yards situated in Germany, a country with a long tradition of efficiency in building high-quality, innovative cruise ships and megayachts, the Lloyd Werft Group – with approximately 1,700 experienced management staff members and workers – is well placed to succeed,” said Lim. “Germany is also where the largest cluster of marine equipment suppliers is located and has excellent government maritime coordination policies.”

The prospect of getting back to the business of building ships, as opposed to merely converting them, means that Genting will, reportedly, be bringing in new staff to help the transition and manage the intense new workload.

“We will build on the strength of the 1,400 employees of MV Werften,” said Jarmo Laakso, the incoming managing director of the new shipbuilding concern. “We have hired and are still hiring more people with cruise shipbuilding experience, who, with the current workforce, will make MV Werften one of the most efficient and innovative cruise shipbuilders in Europe.”

Genting has also been keen to show that it’s seriously willing to invest in the new properties. Shipbuilding in northern Germany, particularly on the Baltic coast, has weathered a difficult storm in recent years, affected by a troubled economy and the collapse of some important players. The effects of the 1997 bankruptcy of Bremer Vulkan, which cost the area 23,000 jobs, hampered the development of the MV shipyard for over two decades.

The news that Genting will put €100 million more into investments in the area, in addition to the inevitable shake ups that come with new management, is welcome capital for Nordic shipyards, which have faced the prospect of job losses and economic decline in recent years. Politicians in the area also breathed a sigh of relief at the news.

“We highly appreciate the commitment of Genting Hong Kong,” said Harry Glawe, the economics minister for the state. “This is a strong signal and a clear statement of Genting on the shipbuilding industry in Mecklenburg-Vorpommern – and, in particular, on the shipyards Wismar, Rostock and Stralsund.”

Ultimately, the objective is bold: to bring the three shipyards up to a steel fabrication capacity of about 150,000t a year – enough, Genting claims, to seriously step up production.

"The news that Genting will put €100 million more into investments in the area, in addition to the inevitable shake ups that come with new management, is welcome capital for Nordic shipyards, which have faced the prospect of job losses and economic decline in recent years."

“To make MV Werften one of the world’s most modern and efficient cruise shipyards, we will invest €100 million in a thin-plate laser-welding line, a cabin module factory, a new covered-section block-building hall, modernisation of manufacturing control systems, and new executive and employee offices and facilities,” said Lim. “The investment in the Lloyd Werft Group will have good returns from the ten-year planned order book, fits perfectly with the company’s global cruise strategy and is in the long-term interest of the company.”

New projects are already under way. In early August, the new company announced entering into a major engineering contact with Finland-based Deltamarine and Elomatic to design a “mega passenger vessel”. Last year, Genting signed a letter of intent for a line of new cruise ships and a new class of river cruises to be built at Lloyd Werft, and in May announced the addition of ten new ships to the fleet: two for Star Cruises – purpose-built for the Chinese market – and eight for Crystal Cruises, of which six are river cruises. These are to be completed by 2019 and 2020 respectively.

“Passengers on our ‘global-class’ ships will enjoy an international-class cruise experience to all parts of the world in an environment in which they will feel at home – whether that is through food, culture, shows, enrichment programmes or excursions,” Lim announced. “With the first two ships, we are focused on delivering a world-class vacation experience for Chinese cruise passengers at an affordable price, plus fun-filled on-board and land adventures in many cities, in the most seamless way, without the necessity of checking in and out of airports and hotels.”

There are yet bolder objectives on the horizon: the yearly production of the shipyards is to be stepped up to produce two neo-panamax ships (200,000t each) and one panamax cruise vessel.

While the company’s sights seem firmly focused on its own expansion, there’s little sign that the shipyards will simply become a means for Genting to step up its own production. In March, for example, it was announced that Lloyd Werft Bremerhaven would be taking on the job of converting the Danish ro-ro ferry Primula Seaways, adding a 30m mid-ship section to offset some of the damage caused by an accident last year. The DFDS-owned ship will see a 25% increase in loading capacity and, for Lloyd Werft board member Dirk Petersjohann, the deal is a sign that the yard “does not regard itself purely as Genting’s own house yard”. The company will not “withdraw from competition”, he said, but rather use the new opportunities to acquire more work.

It is not immediately clear how Genting’s competitors will respond to this, but if the company’s ambitious expansion is anything to go by, they’re likely to consider following suit. The benefits of owning and running one’s own shipyard are obvious: in an industry keen to take full advantage of the rapid growth of the Chinese market, Genting has invested in a significant leg up. However, as the balance sheet of the Hong Kong conglomerate demonstrates, it is not a cheap one – and in a competitive market, only time will tell if it’s worth it. 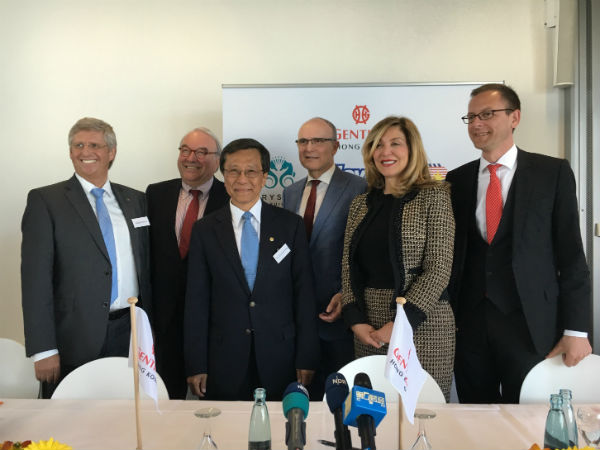 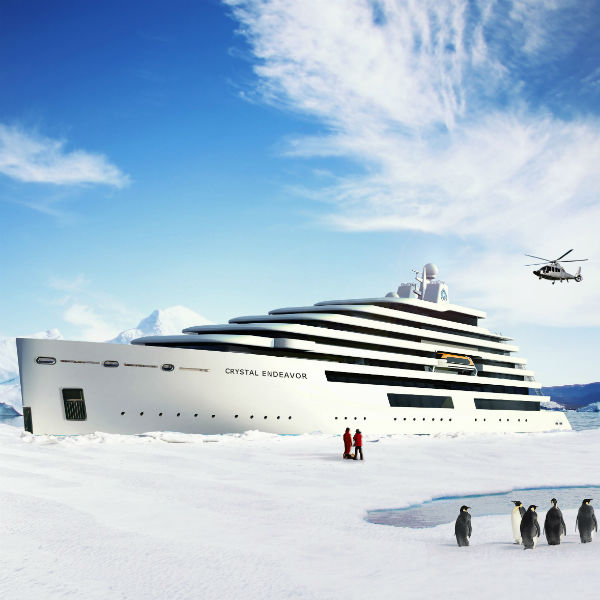 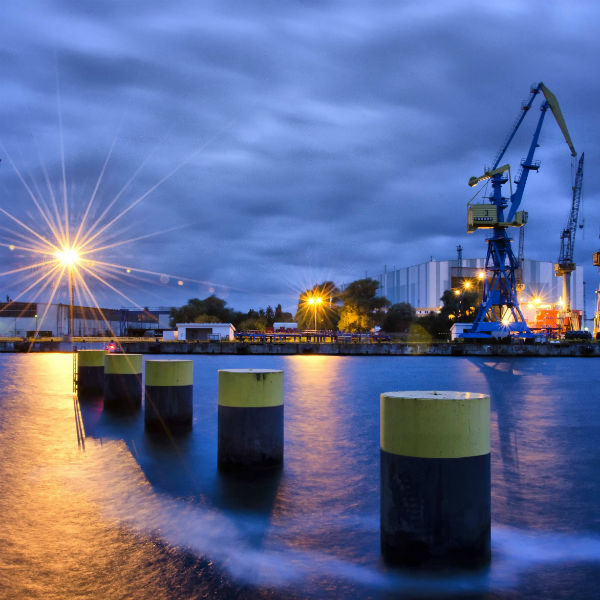 Genting Hong Kong and Crystal Cruises celebrate the eight-vessel order made in May.
Post to: