A regal remastering - the Queen Mary 2

Cunard flagship Queen Mary 2 has undergone a major renovation, involving a 25-day dry-dock refurbishment at the Blohm+Voss shipyard in Hamburg. Almost every part of the ship has been made over, with contemporary touches balanced by a reverence for the past. Abi Millar looks into what these changes involve and how they have been executed.

On 23 June, Cunard’s flagship Queen Mary 2 set sail following extensive refurbishment. The £90-million makeover – one of the furthest-reaching in Cunard’s history – has been billed less a touch-up and more a ‘rebirth’.

While the ship itself is just 13 years old, its predecessor – the original Queen Mary – was launched in the 1930s. Many of the changes on board take their cues from the golden age of seafaring, grounding the ship’s ‘next chapter of innovation’ within an almost mythic pedigree.

Paint us a picture

“Cunard’s passion for delivering a service and experience that meets and exceeds guests’ expectations is transforming the way we travel by sea,” revealed Simon Palethorpe, senior vice-president of Cunard, upon the relaunch of the vessel. “Remastering Queen Mary 2 honours the heritage and iconic status of our magnificent ship to take our passengers forward into a new era of ocean travel.”

This is not the first time Queen Mary 2 has been updated. It was last spruced up in 2011, when the existing 1,310 staterooms received new carpeting, curtains and bedding; the contractors used 20,000L of paint and laid down ten miles of carpet for the project. This time, though, the changes are far more significant, encompassing structural and technical aspects as well as the furnishings. While most dry docks last under two weeks, Queen Mary 2 was stationed in the Blohm+Voss Shipyard in Hamburg for 25 days, amounting to more than a million man-hours.

By the time it arrived back at Southampton, flanked by sister ships Queen Elizabeth and Queen Victoria, the buzz was growing, with thousands of people lining the banks of the Solent to wave it off on its first transatlantic crossing. Whether the refurbishment delighted or underwhelmed Cunard’s passengers – many of whom are brand loyalists who wouldn’t dream of sailing with another line – the changes will certainly have been obvious to anyone who had stepped aboard before. A number of areas have been stripped away and replaced with new features. There are new staterooms, a new lounge, 594,000ft² of new carpet and 4,000 new pictures on the walls. Public areas and staterooms alike have been revamped, and the hull has received a significant lick of paint.

The changes were masterminded by Alison Clixby, Cunard’s director of hotel design and projects, who collaborated with London-based interior design firm SMC.

“This year is the original Queen Mary’s 80th anniversary so it’s only fitting that there are so many of her designs reflected back in Queen Mary 2, remastered,” she says. “With a wealth of art deco features and details, the original ship was a true inspiration. As is always the case with such an important and major project like this, we went through many iterations and designs during the development phase, and getting the attention to detail was very important.”

The process got underway in 2014, when Cunard began trialling different ideas on thousands of guests around the world. The aim was simple: if you can reach the nub of what your passengers want, it believed, teasing out their motivations for cruising and the fantasy they’re buying into, you’re well positioned to deliver on the details.

One of the key findings to emerge from the research was a change in guest demographics. While Cunard primarily targets an elder generation (with the average age hovering between 55 and 60), millennials and Generation Xers comprise a higher proportion of the guest makeup than before. In addition, there are growing numbers of young families making up the numbers – many of them bringing grandparents on board and holidaying in multigenerational groups.

"Our aim is to enhance existing designs and implement a decorative overhaul, looking to emphasise the feeling of understated elegance."

In response, Cunard has introduced 15 single staterooms catering for those travelling in more complicated set-ups – or even those braving the seas alone. These are joined by 30 additional Britannia Club balcony staterooms, which replace the little-used Splash Pool and Regatta Bar, and increase the ship’s capacity to 2,961 passengers.

The other staterooms and suites are in the process of being updated, with half of them already completed and the others due their turn by the end of the year. All have new furniture and linens and, for the first time, a kettle. In the top-tier suites, there have been savvy structural changes geared around maximising space.

At the less lavish end of the spectrum, Cunard has doubled the number of kennels available for passengers’ cats and dogs. The only long-distance passenger ship in the world to facilitate pet travel, Queen Mary 2 previously hosted up to 12 four-legged guests, but has now raised the number to 24. The ship has also employed a dedicated ‘kennel master’, whose job it is to feed, pet and walk the animals.

While this was partly in response to passenger feedback (not to mention the fact that kennel spaces frequently sell out), it is also something of a throwback: the original Queen Mary was famously pet-friendly, with a number of Hollywood grandees bringing their dogs on board. Going back further still, to 1840, the Britannia sailed with a resident cow to provide fresh milk for guests.

The lack of dairy farming aside, it is the public areas of the vessel that most clearly convey the bid to channel Cunard’s past. When working on these areas, SMC abided by three principles: ensuring that each section had a distinct feel, was intuitive to use and tapped into the heritage of the line.

“Cunard has a unique, rich heritage in the nautical and design fields; we have researched these, and looked to incorporate aspects of pattern and design into our plans,” said Andrew Collier, the now-retired SMC managing director, during the development process. “Our aim is to enhance existing designs and implement a decorative overhaul, looking to emphasise the feeling of understated elegance.”

As a result, the designs are dominated by clean lines and art-deco-inspired graphics, but without veering into ‘themed-cruise-ship’ territory. The settings are contemporary but the fittings are traditional, with the decor alluding to – rather than entirely copying – earlier styles. While Queen Mary 2 may lack the design budget of its famously opulent predecessor, which was created during recovery from the Great Depression, the term ‘remastering’ is not too great an exaggeration.

The grand lobby, for example, has been made somewhat grander through the removal of two elevators, drawing the eye to a starburst carpet in regal reds and gold. The Todd English restaurant has been replaced by The Verandah – a formal á la carte dining room that pays homage to the original Queen Mary’s Verandah Grill – while the Princess and Queens Grills have reconfigured the space by swapping pillars with screens.

The ship’s buffet restaurant, Kings Court, has also upped its user-friendly quotient by subtracting an elevator to open up the room. Widely panned in its previous incarnation as little more than a canteen, the space is now envisaged as somewhere guests might hang around.

Its adjoining Winter Garden has been replaced with the airy Carinthia Lounge, a multipurpose area that serves a light breakfast in the morning, patisseries in the afternoon, and refreshment and entertainment in the evenings. Alison Clixby, speaking to the Telegraph,  commented that the demand for public spaces to be versatile – sometimes by way of moving parts – is the biggest recent change she has encountered in cruise ship design.

Queen Mary 2 remains conservative in its innovation, preferring to tap into the nostalgia evoked by the name rather than alienate its target demographic with waterslides. To modern eyes, it looks almost conspicuously low-tech; with a Wi-Fi connection that’s expensive to access, for instance, the ship is able to sell itself as the ideal place for a digital detox. At the heart of the cruise experience is a powerful sense of romance – a way to extricate oneself from the demands of modern life and channel a wistful kind of glamour rarely encountered elsewhere.

“The remastering of Queen Mary 2 continues the transatlantic tradition by the thoughtful contemporising of
the product,” David Noyes, CEO of Cunard, explained. “It is a testament to Cunard’s attention to detail, incorporating inspiration from our past that continues to propel the powerful Cunard story, which we think will strongly resonate with today’s travellers.” 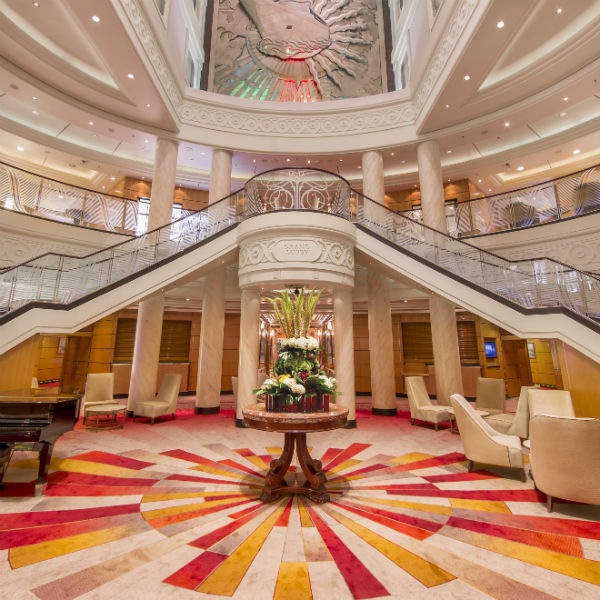 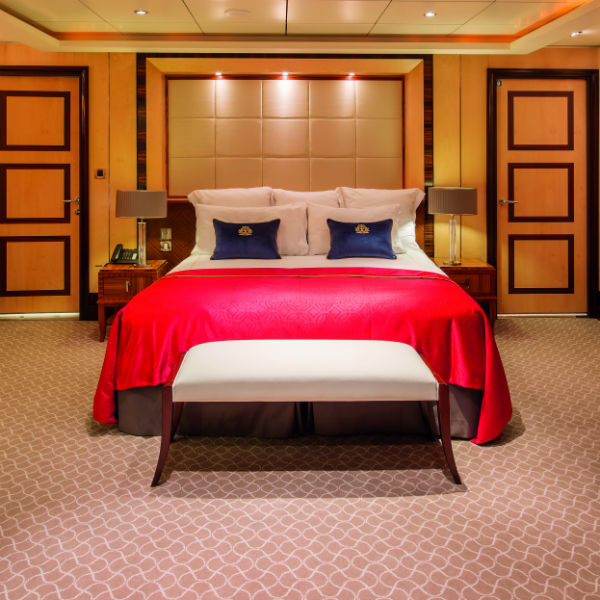 A luxurious bedroom in the Queens Grill balmoral suite. 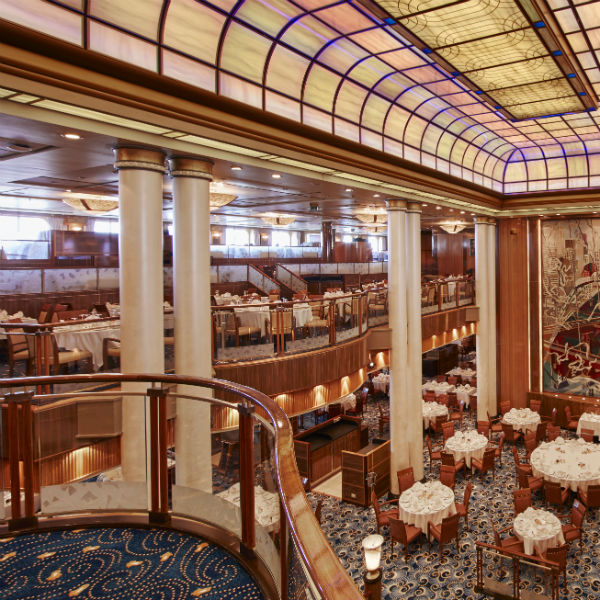 The refurbished Britannia Restaurant on board Queen Mary 2. 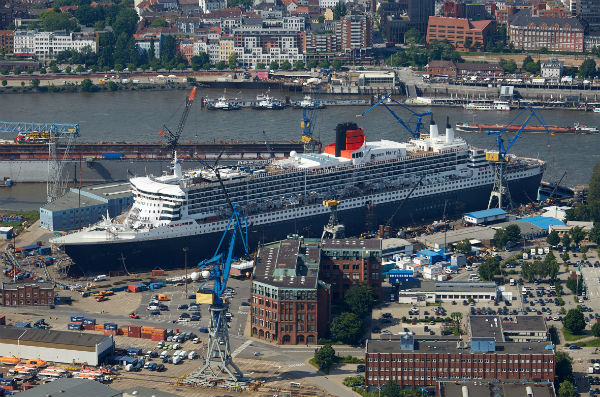 Queen Mary 2 in the Blohm+Voss dry dock for its renovations.
Post to: